Botched Menagerie is a series of paintings and prints of intricately drawn non-human animals whose veiled interactions invite close exploration through the small size of the paintings and careful scrutiny because the animals I pair together do not belong in the same geographic environment. By the unnatural combination of species portrayed in their normal body language and through my use of pictorial composition, I reconsider how one normally sees the animal rather than repeating and accepting stereotypes.

The animals in my work allude to hierarchical relationships without reinforcing the normal predator/prey binary. Their body languages are consistent with natural behavior, but the interaction between the two species may switch the predator/prey role or suggest that the predator role is not always dominant and the prey role is not only submissive.  Each painting resists an accepted hierarchy. The animal that is more submissive than its painted counterpart in the physical world may not be a prey animal in my painting, for instance.

Through the use of linear perspective, I construct power relationships between the viewer and the subjects. By using a “worm’s eye view,” viewers may feel a sense of powerlessness, whereas a view from above tends to empower the onlooker through implied domination.  In orthographic perspective, one views every point of a subject directly in front of it, requiring thousands of points of view to create a full image.   Because the viewer sees more than one perspective, he might feel omnipresent and voyeuristic and therefore powerful. The paintings further suggest a non-threatening intimacy through eye contact. The direct gaze of one of the animals in each painting beckons the viewer, offering an entry point into the painting, while directing the power of the animal outward.  By these and other pictorial devices, I re-examine the impact that the setting, perspective, and pairings of animals have on the meanings we assign them and offer an alternative to seeing animals as road kill, pets, cartoons, and the subject of wildlife television specials. 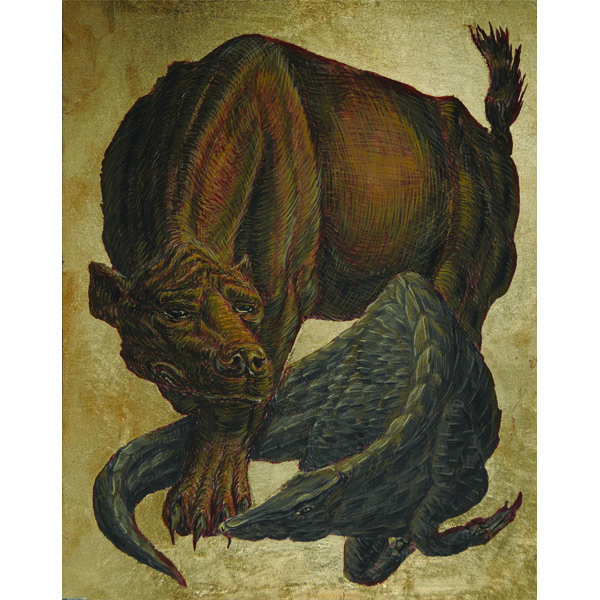 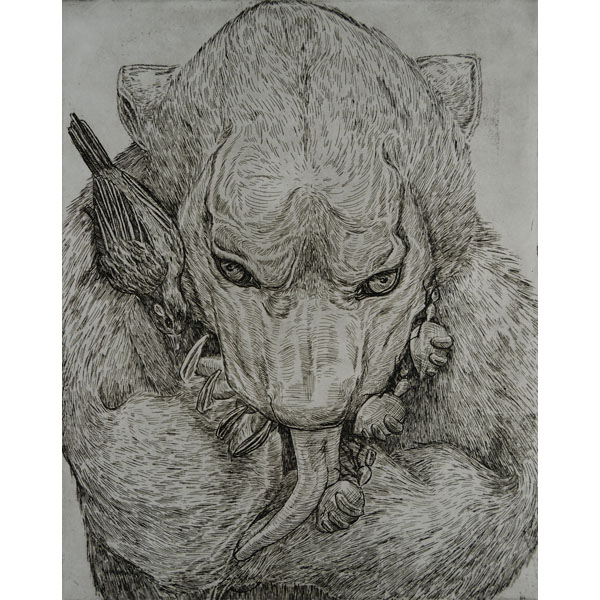