more information
Home» News» Putting the “Team” in “I” 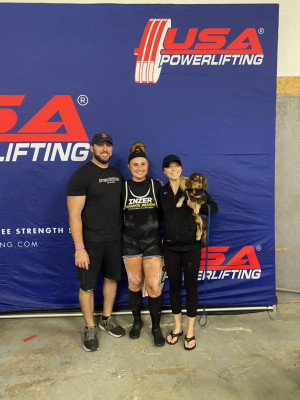 Sophia Kennedy ’21 (middle)When Sophia Kennedy ’21 strides toward the lifting platform and grasps the barbell, she’s the epitome of drive, focus, and dedication. She’s ready. “It’s just between you and your lift,” she says. “Gravity becomes your opponent; you have to overcome that gravitational pull that’s preventing you from completing something.” As she prepares to face gravity, she knows she’s facing her own self-doubts, too, but she’s more than ready to prove herself wrong.

Following successful athletic careers in soccer and track and field, Kennedy decided to tackle powerlifting, an individual sport. The training is time-consuming and physically taxing, and it demands an extremely high level of personal accountability—no one else is going to step in to help you grind through a tough back squat (at least not during a competition). The long workouts and rigorous attention to detail necessary for achieving peak performance in powerlifting require a unique level of dedication. A powerlifter needs to be able to diligently and patiently follow a progressive training program over the course of weeks and months before stepping onto the competition floor to test their mettle on the barbell bench press, back squat, and deadlift. A well-structured program is crucial, as pushing too hard too quickly could lead to impaired performance due to central nervous system fatigue, which reduces the lifter’s ability to recruit as much “oomph” from working muscles.

Sounds easy, right? It isn’t, but that’s part of why Kennedy finds powerlifting so fulfilling and empowering, especially as a woman, and she draws further inspiration from the successes of the women currently dominating the sport, like Hunter Henderson and Stefi Cohen. She enjoys the chance to constantly improve herself through such physical (and mental) challenges, and she’s committed to helping others seize that same opportunity in the context of their own daily lives.

A kinesiology major, Kennedy works as a strength and conditioning intern under the tutelage of John Norcott, Southwestern’s head strength and conditioning coach for all of the university’s NCAA teams. She’s also a certified strength and conditioning coach (NSCA-CSCS), a USA weightlifting certified level 1 coach (USAW), and a certified personal trainer (NASM-CPT). She recently conducted a capstone research project examining the role of physical activity in the lives of residents of the Brookwood Community, a community for adults with special needs in Georgetown, Texas. She’ll compete in her first powerlifting meet in the spring and has accepted a graduate assistant position at West Texas A&M University after graduation.

It probably sounds like Kennedy has it all figured out. She’s dedicated herself to exploring movement inside and outside of the classroom and on and off of the field, she’s already accumulated hours and hours of work experience and continuing education certifications, and she knows what it takes to accomplish her goals. However, as Kennedy has come to learn during her time at Southwestern, “you can’t succeed on your own.” Powerlifting may be an individual sport, but Kennedy possesses a deep understanding of the importance of a team and is a team player at heart. She emphasizes that having a support system and a mentor are crucial elements of both personal and professional growth. Self-improvement is a never-ending process, but it doesn’t have to be a solitary one.

After Norcott spoke in her kinesiology class, Kennedy approached him about the possibility of interning. Since 2018, he’s helped her develop the floor presence and confidence in her abilities necessary to being an effective coach herself. “I can confidently say that everyday I have learned a life lesson while interning under Coach Norcott… He goes above and beyond to ensure that every individual he crosses paths with has an opportunity to improve themselves.” He helps his interns “learn to communicate effectively, present themselves professionally, and carry themselves with confidence.” An experienced powerlifter himself, Norcott has also been able to guide Kennedy’s training.

Although the situation has certainly begun to change over the past few years, the field of strength and conditioning has historically been and continues to be a male-dominated field. It’s not easy to speak in front of a group of athletes when all eyes are on you, and it can be even more challenging if you feel like you’re the odd (wo)man out. By practicing intentionally and working with a mentor, Kennedy has learned to carry herself with composure and humility no matter who else is in the room. She’s able to spot players’ strengths and weaknesses, and she’s learned to identify her own, too. When she makes a mistake, she owns it immediately and openly. As a woman, Kennedy has found strength coaching to be incredibly empowering, and she hopes to be able to help other women find their way onto the coaching floor in coming years.

In addition to finding a mentor, Kennedy has also found a team: her fellow interns provide the support and accountability she needs to succeed. She’s quick to point out that her growth as a person, a coach, and an athlete has occurred within the context of a group of hard-working, like-minded individuals all striving to better themselves and each other. Building these relationships is immensely valuable, but it can certainly be intimidating (at least for some of us). In situations like these, Kennedy’s drive, eagerness to learn, and ability to engage with others shine. “There’s always something to learn from what you’re doing,” she says, “and if you have the mindset that you’re going to gain something from whatever experience you’re in, then you will.”

Kennedy’s insights are indicative of the unique strength of Southwestern’s community and a lesson to all of us. Everyone needs a coach or a mentor, and we can find a team anywhere. We just need to be willing to look, reach out, and be teammates ourselves. If we can be open to new experiences and refuse to let the gap between our intentions and our actions expand unnecessarily, we suddenly have an abundance of opportunities to learn and try new things. Plus, we’ll be able to celebrate our discoveries and accomplishments in style—with a team, that is.

“It’s just between you and your lift,” Kennedy says. As she begins to lift the barbell up off of the floor, the outcome quickly becomes clear. Gravity doesn’t stand a chance. Strengthened by the support of a mentor and a team, Kennedy’s determination and countless hours of practice make the bar seem almost weightless as it arcs through the air.

After that, she’s back to work, striving for her next deadlift personal record.