Of Whales in Research

Many readers shy away from—or try to hurry through—Herman Melville’s Moby-Dick (1851). Their eyelids droop over classifications of whales, porpoises, and manatees. They nod off while skimming descriptions of cetaceous anatomical parts while trying to catch sight of a plot that seems as elusive as the great white whale himself. Even English majors and doctoral students have been known to dread the very prospect of a novel that has chapters with titles such as “The Specksynder” and “Of Whales in Paint; in Teeth; in Wood; in Sheet-iron; in Stone; in Mountains; in Stars.” But to rush through the classic or never open its pages is to miss the ironic, self-deprecating, and sometimes bawdy humor in those seemingly tedious passages (don’t even get me started on chapter 95, “The Cassock”). For example, at one point, Melville’s narrator Ishmael declares hyperbolically that attempting to represent a Leviathan like Moby Dick would require “Vesuvius’ crater for an inkstand.”

Hayden Smith ’20 admits that he’s no fan of literature courses, but like Melville, he 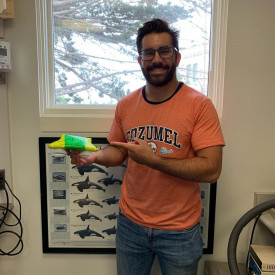 Physics major Hayden Smith ’20finds cetaceans fascinating and knows firsthand what it’s like to write and publish about whales. He is the first author on a paper titled “The Physics of Whale Movement: Drag and Thrust Production to Measure Whale Propulsive Efficiency,” which stems from a Research Experience for Undergraduates (REU) funded by the National Science Foundation (NSF) and hosted by California State University, Monterey Bay, at Stanford University’s Hopkins Marine Station. During the summer of 2019, the physics major and math minor focused on baleen whales, studying the physics of their movement using sensors attached to the animals and measurements captured by aerial drones. “It was awesome!” Smith recalls. Getting into the highly competitive NSF program was the first challenge. Then, he says, “It was very hard at first because of the learning curve. Being from Texas, I had no idea about whales or marine mammals—or anything to do with motion science besides the fishing I do here. But you just sit down and learn and read and write out what you’re doing until you can do it.” He ended up writing a research proposal, multiple presentations, and a long article that he later submitted for publication. “It was very challenging to do all that work in 10 weeks,” Smith adds, “but it was an extremely fun 10 weeks.”

One highlight was collaborating with likeminded scientists. “I found a good group of friends to work with. I loved talking about the research with people who were just as interested,” he shares. Being paid to conduct research one mile from the beach—with nonwork hours spent exploring San Francisco, hiking through Yosemite National Park, and encountering dolphins, seals, otters, and sea lions at La Jolla Cove and along the scenic stretches of the Pacific coast—made the REU all the more exciting.

But one of the most rewarding aspects of the experience was conducting original research that contributed to science, specifically the fields of ecology and oceanography. Smith developed his passion for science, technology, engineering, and mathematics (STEM) in high school, and even while applying to college, he already had his sights sets on attending graduate school in engineering. After four successful years at Southwestern—where he also played football, developed lifelong friendships in the fraternity Phi Delta Theta, engaged in the Physics Club and Honor Code Council, mentored elementary-school students in Georgetown, and volunteered as a fundraiser for Live Like Lou, an organization supporting the research and treatment of people with amyotrophic lateral sclerosis (ALS)—Smith is doing just that: he is currently working toward his master of science at Texas A&M University in ocean engineering, a field which focuses on the design, construction, operations, and maintenance of human-made technologies on coastlines and in bodies of water. The Southwestern graduate is now among the scientists who help develop the systems used to navigate, monitor, communicate, and position vehicles or structures underwater.

“I think we can save or conserve the ocean—that’s why I want to pursue a career in renewable energy.”

“I want to do ocean engineering because I want to be by the water,” Smith says, “but I also want to keep the ocean clean and pristine. I think we can save or conserve the ocean—that’s why I want to pursue a career in renewable energy.”

Smith’s dedication to renewable energy and conservation was evident even before the NSF REU in California. He teamed up with fellow physics major Mike May ’20 twice for research projects under the auspices of Southwestern’s King Creativity Fund: in 2020, with the mentorship of Professor of Physics Steve Alexander and Coordinator of Science Facilities and Equipment Lee Fellows, they focused on thermoacoustic energy generation. But Smith’s favorite project was completed the year before, when he and May, under the supervision of Alexander and Fellows and alongside fellow students Kyle Howard ’20 and Justin McCormack ’20, researched how to convert ocean wave energy into electricity while using reverse-osmosis technology to create fresh water. As with the REU, these King Creativity projects clarified for Smith that he enjoys doing research but also gravitates toward the practical applications of that research. As he looks to his future, he hopes to continue designing innovative technologies so that he might “have a lasting effect on the world.”

Of course, Smith also appreciates his multiple research and internship experiences because of the mentorship he received. He says that Alexander, Professor and Lord Chair of Mathematics and Computer Science Fumiko Futamura, and Associate Professor of Physics Mark Bottorff were all “very influential in getting me through SU successfully.” And thanks to King Creativity, he adds, he learned skills and concepts from Fellows “that SU classes don’t teach.” It’s the community that first drew the student–athlete to the university and will remain his touchstone as he continues his career. “Southwestern was an easy choice because everybody was so personable,” he reflects. “SU gave me the ability to have a personal experience with my professors who have connections everywhere. That small classroom environment gave me and all the other students the opportunity to do what we want to do.”