Four Southwestern students relate their experiences as community-engaged learning associates with nonprofit organizations during the summer of 2020.

more information
A Place to Be

more information
Across the Aisle

Mattie Mint ’22 shares about her journey into the professional world through the Kemper Scholar Program.

more information
I Thought I’d Never Graduate, and That Was BEFORE the Pandemic…

more information
Scholarly Perspectives on COVID-19, Part 6: The Psychology of a Pandemic

Associate Professor of Psychology Bryan Neighbors reflects on COVID-19, “the most significant natural disaster to strike humankind in all of our lifetimes.”

more information
The Romance of the Archive

Librarian Megan Firestone provides a behind-the-scenes look at Special Collections and the magic of handling cultural artifacts past and present.

more information
Scholarly Perspectives on COVID-19, Part 5: The Politics of a Pandemic

Garey Endowed Chair in Chemistry Maha Zewail-Foote publishes an article on how she successfully transformed her biochemistry lab to an online platform.

more information
With Energy to Spare

Recent physics graduate Mike May ’20 demonstrates how taking risks by learning outside your major is crucial to becoming a leader in innovation.

Three Southwestern alumni divulge the details of their lives postgraduation.

A student-led campaign aims to raise awareness about the social and environmental impacts of single-use menstrual products.

Studio art alumna Kelsey Baker ’16 fills us in on what it’s like to finish her graduate degree during a pandemic and how she is creating art in a socially distanced world.

After graduating from Southwestern, studio art major Kelsey Baker ’16 wrote out a loose plan for what she wanted to accomplish in the next five years. Fast forward to today, and she has checked off most of her goals, including earning her master of fine arts this spring and returning to Austin to start working professionally. Despite the unprecedented challenges this year has thrown Baker’s way, the industrious artist shares how she has managed to adapt and remain creative through difficult times. 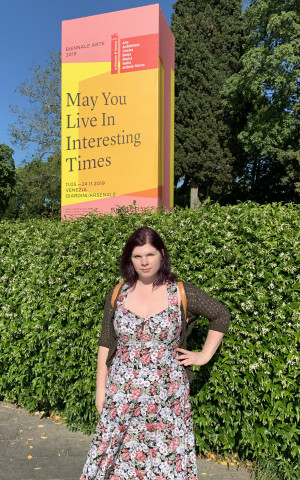 Baker at the Venice Biennale, the longest-running contemporary art exhibition in the world.In 2018, Baker traveled over 1,500 miles from Austin to Pullman, Washington, to attend graduate school at Washington State University (WSU). Using the self-driven and research-focused skills she developed at Sarofim, she found success in WSU’s explorative opportunities and competitive funded assistantships. Last summer, she traveled to Italy on the John Ludwig Graduate Fellowship in Fine Arts to study Baroque painting and attend the prestigious Venice Biennale, the longest-running contemporary art exhibition in the world. In October, she worked with professors in art and chemistry to develop thermochromic paints and create a temperature-sensitive, color-changing outdoor mural on an interdisciplinary research and innovation grant. Primarily a painter, Baker expanded her practice to include woodworking, video, and installation work. This past semester, she taught both intermediate and advanced painting classes while developing her final exhibition to be featured in the Jordan Schnitzer Museum of Art.

Like all students this spring, however, the end of Baker’s school year did not go to plan. Her university shut down in early March as Washington state gave rise to the first confirmed coronavirus cases in the U.S. Although Pullman was a “relatively safe haven” on the other side of the mountains from the Seattle area, there was still major concern among the many in-state students whose families lived near the outbreak.

The sudden campus closure meant Baker would have to quickly remodel the two painting classes she was teaching for distance learning. “Online teaching, especially a studio course, isn’t necessarily the easiest thing to do,” she points out. Like her professors at Southwestern, she prefers to explain a technique to a student by painting directly onto their work. Reframing the courses and her teaching approach to be effective in a nonphysical space was challenging, but she managed by adjusting projects toward a more concept-based rather than skill-based focus.

On top of maneuvering online art classes, Baker had to find the best way to digitize her final exhibition—which was just being installed when the campus closed—for an online gallery. Titled Call of the Void, the exhibition’s concept is to present “multiple thresholds that offer imaginary access to void-like spaces,” including portalesque paintings that “invite the viewer to experience a thinning of the veil[, to] brush up against the edge of the unknown, containing everything and nothing.” A sculptural centerpiece represents what the undefined spaces may hold, combining recorded dream recollections with a projected video collage of movement and dream imagery. The dream recollections came in from approximately 50 strangers across the country after Baker had mailed her friends flyers to be passed out or left around different cities to advertise a hotline on which contributors could record their memories. “There were times where the sound of someone talking would line up with imagery you’re seeing in the video or the paintings, and so it’s a moment of, oh, everyone’s experiencing these sort of similar things in their subconscious … like, communitas,” she explains. Baker was able to capture most of the essence of her exhibition digitally, but she hopes to expand on it and show it in a physical space in the future. 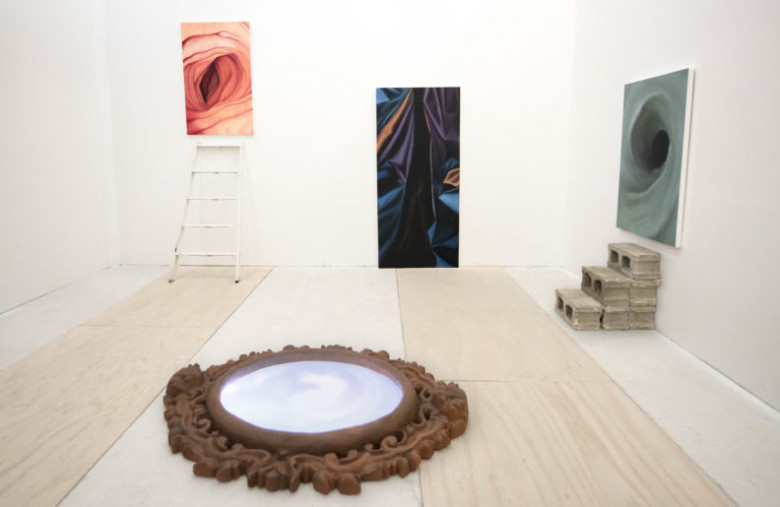 Call of the Void

The themes explored in Call of the Void hold even more meaning this year than Baker might have imagined. As the world brushes up against the unknown of an entirely new experience that challenges our perceptions of reality, digital mediums are helping us construct a sense of community. They are also a primary way of experiencing art right now, when museums and galleries remain closed to limit public gatherings. But Baker says she is not ready to settle into a completely virtual artspace. “Digitally sharing work is an avenue, and I think it needs to be explored more now because of what’s going on, but it’s not something I’m particularly interested in,” she admits. While she prefers to incorporate media as part of an installation you have to be in the space to experience, she does think her video editing skills open up a lot of possibilities for creating art while physically distanced. “I do feel like there’s a lot to mine there, and I have endless ideas,” she says.

Baker is now back in Austin and busy brainstorming physically distanced exhibitions with Contracommon, a local arts collective executive directed by Southwestern alumna Taylor Bailey ’17. Baker’s classmate Forrest Aderholt ’16 is also a member. “It’s very much a lot of Southwestern people doing this all together,” she says.

Contracommon has several projects in the works for their gallery space at the Hill Country Galleria. This month, they began running window shows, where artwork is displayed close to the windows of their storefront gallery to be viewed from the walkway outside. Both Baker’s and Aderholt’s work is currently on display in the first round of their revolving show RE/FLEX, which runs through August 23. Baker also helped curate a concurrent window show, No Contact, that is on display through September 19. In December, they plan to invite Hive Arts, another collective that works in digital and data art, to set up a light and video projection display as part of a big event that is happening at the galleria. They are also starting a platform for tutorial videos, and Baker hopes to put together some introductory painting tutorials soon. “We’ve come up with a lot of plans, and I’m excited about what we’re going to do,” she says.

Outside of her projects with Contracommon, Baker is working on commissioned paintings and keeping an eye out for teaching positions in Austin. “I’m looking at any and all options to pay my bills, for sure,” she laughs. “Teaching was something I wanted to do. I did it the entire time I was in grad school, and I really enjoyed it.” She currently has three paintings in the works and is devising a plan for a long-term video project, hoping for a chance in the coming months to get other people involved.

Reflecting on her experiences at and after Southwestern, Baker believes the rigorous studio art program at Sarofim helped prepare her for the many professional challenges she has encountered in the past four years. Her best advice to current students is to stay focused but flexible. “Keep your eyes on the prize, so to speak,” she suggests, “but also be prepared for, and welcoming to, changes to your plan.”