The Coming of the Printing Press

Before we begin to look at the specific artifacts held by Southwestern University’s Special Collections and Archives, it is imperative to understand the changes that emerged in early printing and bookmaking history so that we know what it is we are looking for! In a study about early printed books, it is easy for us, 500+ years later, to assume that these were the earliest books created. However, books were very common prior to the invention of the moveable type and printing press by Johannes Gutenberg in the mid 15th century. As

Let’s start at the beginning: what is a book? A book is a type of codex: the technical term for a gathering of leaves secured along one side. Though this project focuses primarily on books and leavesleafs, the technological advancements discussed here also applied to pamphlets, playbills, proclamations, and other forms of distributable information. Prior to this, books were typically handwritten manuscripts. They could be loose leaf parchment, temporarily bound and stitched, or for more lavish books, professionally bound together by a book binder. In the line of bookmaking, the 12th century (that’s 300 years before the invention of the printing press!) is seen as the pinnacle of talent for bookmakers. Romanesque binders who understood the possibilities and limitations of their materials were able to make this profession into more of a skillful craft. Literacy levels were not high during the medieval ages, and it was typically clergymen who were in charge of transcribing documents, much of which was religious doctrine. In this leaf from a 13th century Vulgate Bible we can see the meticulous effort needed to transcribe these documents, line by line, utilizing a quill and iron-gall ink. As the caption indicated, these small bibles were carried by monks for personal use, and farther along in this study, we will discuss the importance this particular bible holds. 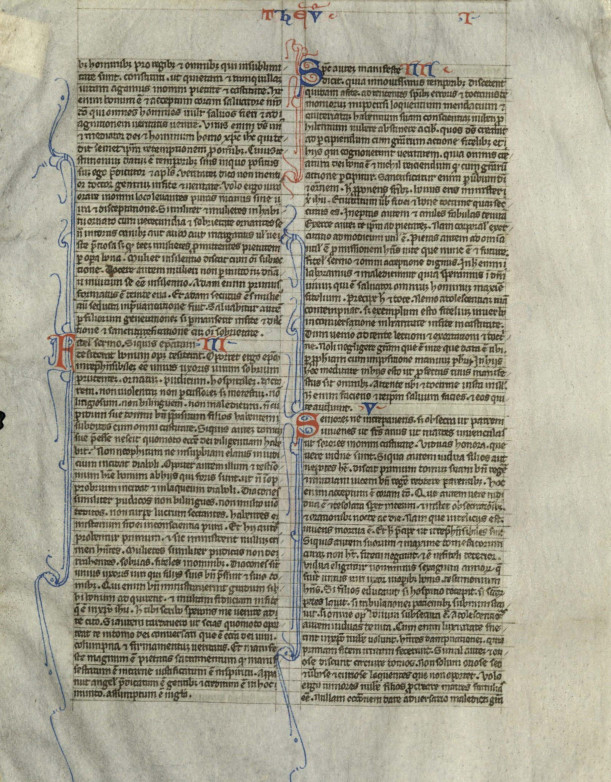 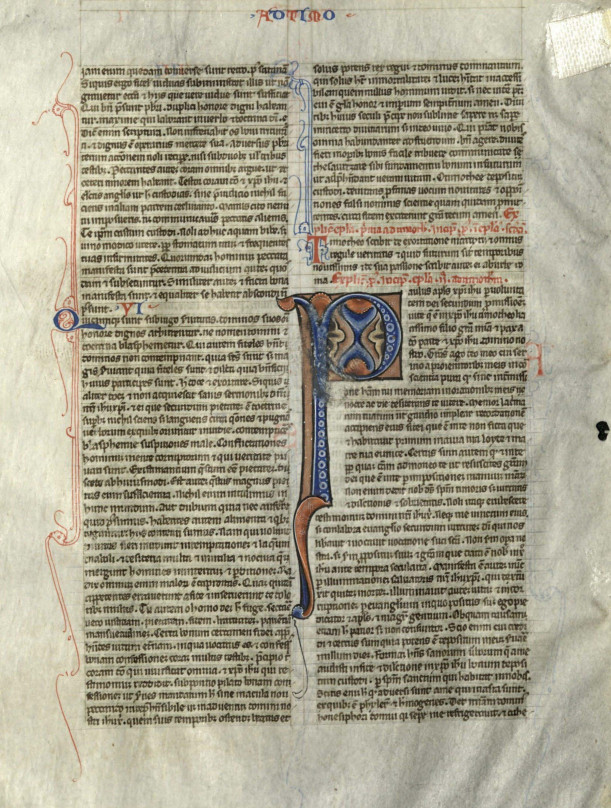 Back of [Vulgate] Leaf. 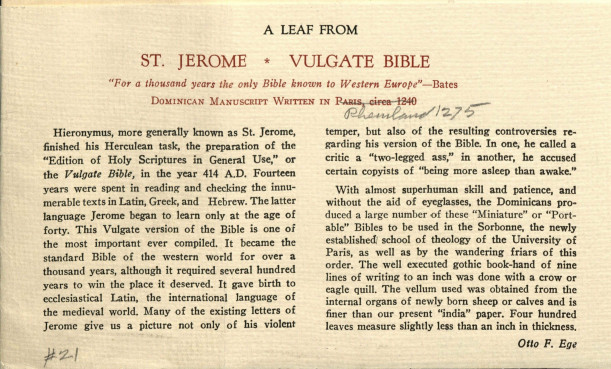 Leading into the 15th century, making books was an expensive endeavor. The reason for this was based primarily on the cost of the materials. Parchment in particular constituted almost half of the cost of the book. Different cultures utilized different materials to write on, including papyrus in the ancient world, animal or fiber based parchment, and different forms of paper. In the West, vellum: parchment made from the skin of a calf or lamb (or sometimes their internal organs), was one of the most common types. It is easily identifiable, with visible inconsistencies in the skin. 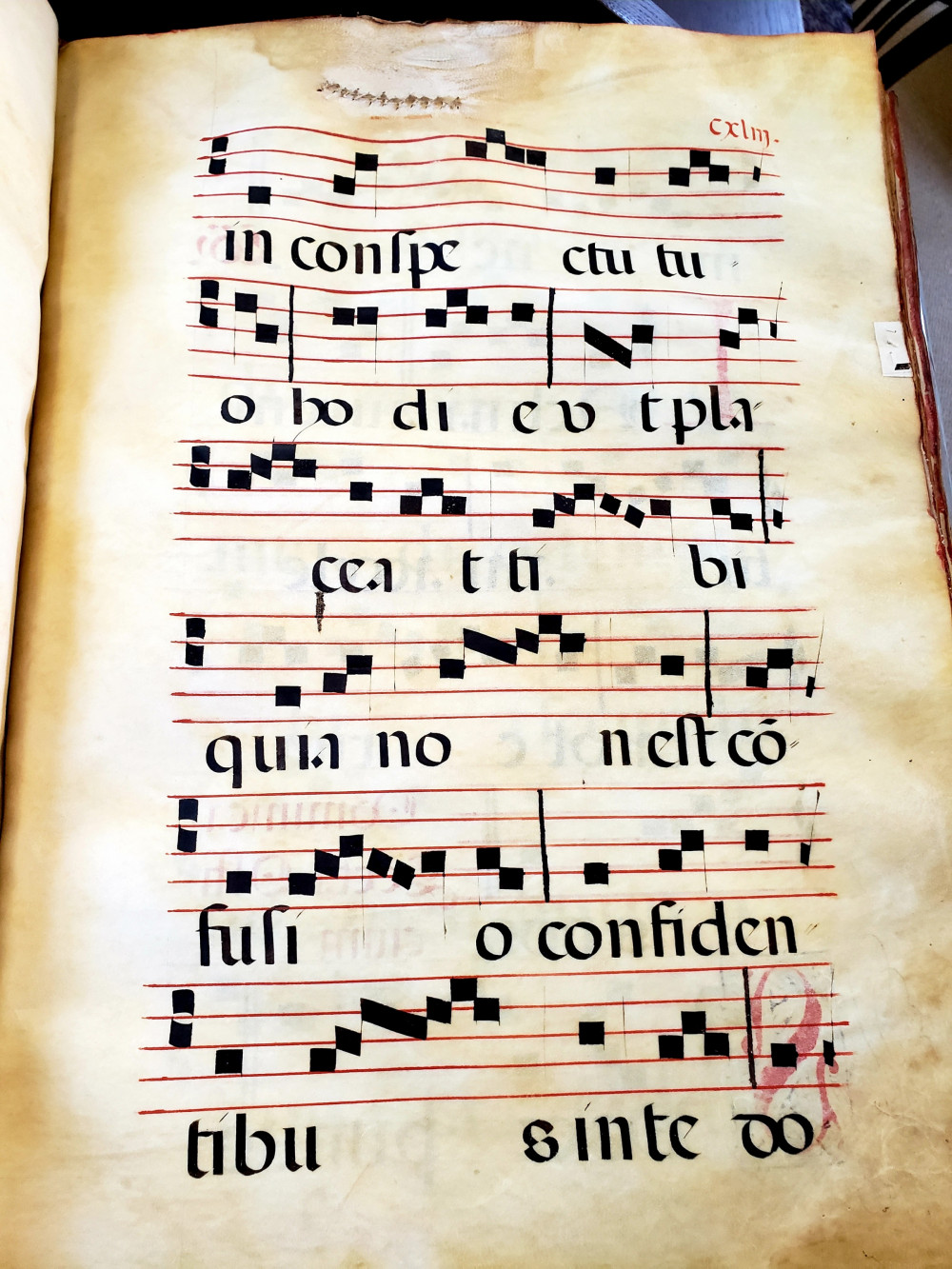 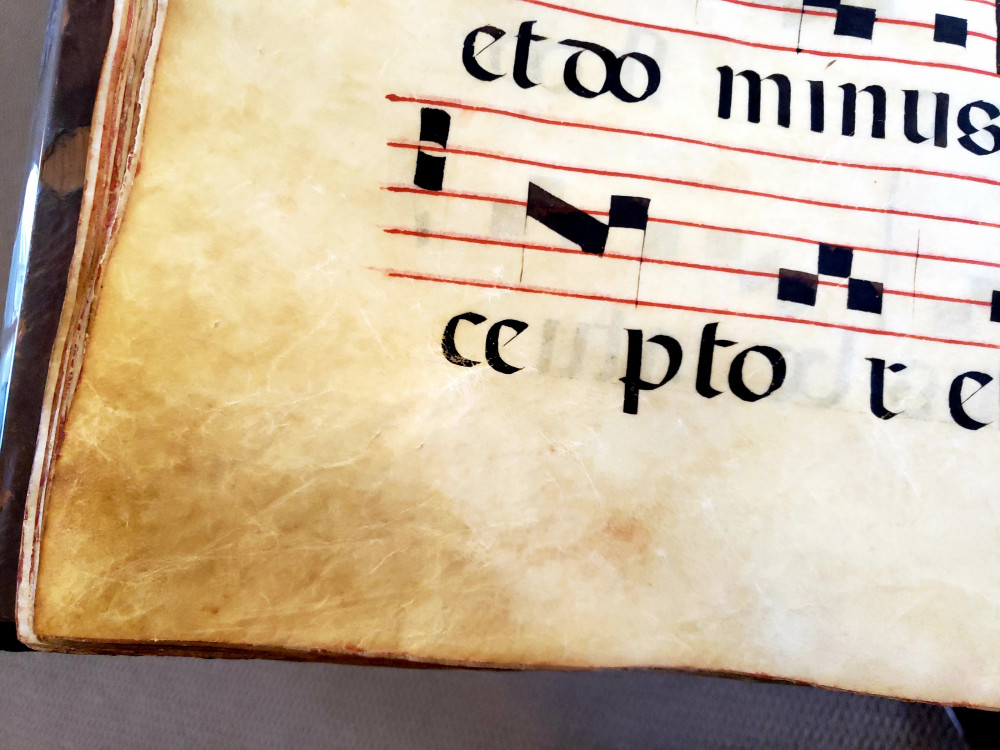 Close-up of [Graduale] showing details in the vellum.

Also, by 1500, the paper trade had made its way from Asia to Europe, and the ease of producing handmade paper as opposed to producing vellum made it more lucrative. The paper industry not only coincided with the rise of the printing industry, but also caused manuscript production to rise as well. There was a tendency to print materials that needed to be completed by hand. In fact, many of the early printed materials were in fact indulgences with spaces left blank for the purchasers to write their name.

However, in Europe literacy levels began to rise at the end of the medieval era. The Protestant Reformation that spread throughout the British Isles, the Holy Roman Empire (what is now Germany and its surrounding areas), and North to Norway, Denmark and Sweden brought with it a belief in individual responsibility to religion and to God. Therefore, society was no longer content with relying on the words of monks and clergymen, and the people desired access to information themselves. Enter: Johannes Gutenberg and the printing press! 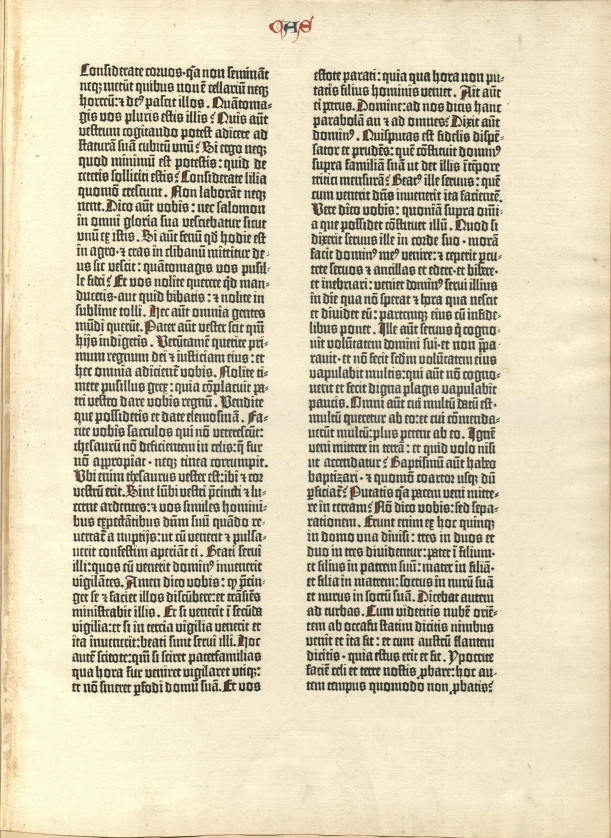 Leaf of the Gutenberg Bible.

It’s near impossible to separate which influenced the other: the rise of paper production and the success of the printing press. Perhaps the ease of the press made the demand for paper greater; or perhaps the availability of paper gave printers a reason to utilize the press. Either way, paper and press combined and the first technology boom pulled the world out of the dark ages and into what is now called the Early Modern era.

Just like most first generation technology, there were a few hiccups that needed to be sorted out during the early decades of the book-press-boom; however most of these were not due to the technology of the press itself, but in the dramatic change of materials utilized to make books. We may take books for granted nowadays, but keep in mind, the printing press was invented in the 1450s, and it stayed roughly the same, albeit with minor improvements, until the 1800s when machinery was invented to control the press instead of humans. Do you know how awesome technology has to be to last almost 400 years?? The iPhone was first released in 2007, and 13 years later we’ve gone through over 11 generations, the latest only barely resembling the first. What Johannes Gutenberg did lasted over 350 years!

However, with a change this big, there were some repercussions. Because paper was more manageable than animal parchment, the skill necessary to become a master bookbinder dwindled. Where bookbinders in the 12th century had to be intimately familiar with how the wood and parchment and thread would shape and form together, the consistency of the paper gave the illusion that craft was not necessary. Additionally, changes in materials gave the overall book a weakened structure. Many historians see the same period that introduces us to the printing press and movable type as the era of decline in bookbinding standards. In response to this, luxury bookmaking rose as a desirable craft. In the next blog, we will discuss what inferences we can make by looking at what was then considered mass produced books in comparison to luxury books, what lasted and what changes were made in printing styles.

IMPORTANT before we begin to compare what materials we have, we need to remember that what has survived is not necessarily representative of all that was being created. There were many items that were not intended to last and we therefore can only learn about them when they’re mentioned elsewhere, but no first hand accounts exist. As a result our source material data is inherently skewed.

*bookbinders were traditionally male, though there were some women who transcended this gendered occupation. See Helen Smith for example.