The Abstract Art of Evolving 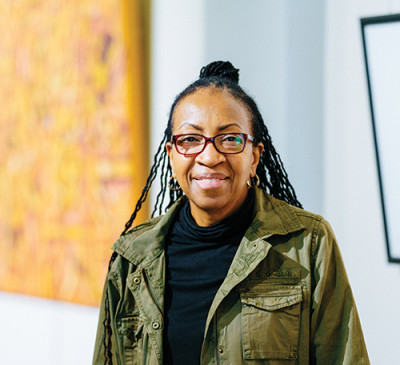 Norma Clark ’97On Friday, May 10, 2019, Southwestern students, faculty, staff, and alumni gathered in the Jesse H. and Mary Gibbs Jones Foyer at Celebrating 50 Years of Black Excellence, an event hosted by the Office of Diversity Education. Commemorating the culture and accomplishments of SU’s former and current Black students, the festivities included a recognition ceremony for SU’s first Black graduate, Ernest Clark ’69; a high-energy reception; and a collaborative quilt-making activity.

Among the Black students who have helped shape the landscape of Southwestern University and whose notable achievements were recognized at the event was the quiet, unassuming Norma Clark ’97 (no relation to Ernest). A local artist, Clark attended SU from fall 1970 through spring 1972 and then returned to the University as a nontraditional student in 1992 to complete her degree. She specializes in abstract art, and attendees were invited to view her expressive, intuitive, and spontaneous paintings during a solo exhibition at the Sarofim School of Fine Arts.

Clark, a first-generation college student, did not particularly relish the idea of going to college when she was first accepted to SU. But her parents wanted her to go, and because her father was a cook at the University—he would end up working here for 45 years—she was able to attend for free. Of her first stint at Southwestern, Clark recalls, “There were a few Black students there, which was fun, and I really enjoyed the art and art history classes, which I did well in. My two art professors”—the late Gus Farmer, professor of art, and the late Robert (Bob) L. Lancaster, who was then chair of the Department of Art—“were really supportive.”

Clark sheepishly admits that she was not so enamored of her other classes. So after getting married after her sophomore year, she left the University in good standing to focus on family and work. Twenty years later, she returned to finish what she started and did so successfully—a lesson she has passed on to her three children. “I wanted that degree. I didn’t want to live a life of what if? or if only. I went back to school because I knew what a difference that would make for me,” she reflects.

Driven and focused and with the mentorship and encouragement of Professor of Art Victoria Star Varner, Clark blossomed during the second stage of her higher education. In a project assigned by Varner, Clark discovered abstract art. She and her classmates were required to transform a single work by an “old master” (i.e., one of the renowned European painters who worked between the Renaissance and 1800) into 10 different abstract pieces. She found it fun and exciting—so much so that when she was asked to return to traditional representational work, she knew she couldn’t go back. “The thing I really enjoy about abstract art is that you don’t know what the finished product is going to be,” she comments. “It’s like what Forrest Gump says about life being like a box of chocolates: ‘You never know what you’re gonna get.’”

While attending the Celebrating 50 Years of Black Excellence reception, Varner remembered how Clark excelled in studio art and that she earned the Lancaster Award in Studio Art, recognizing her as “an outstanding senior who met the highest standards in art and art history.” Clark graduated from Southwestern in 1997 and went on to earn her master of fine arts from Vermont College of Norwich University in 2000. She has exhibited her work in Georgetown, Austin, Dallas, and Atlanta, and in 2004, she was among a group of alumni who were asked to display their work at Southwestern. The Celebrating 50 Years of Black Excellence event was her first solo exhibition at Southwestern. 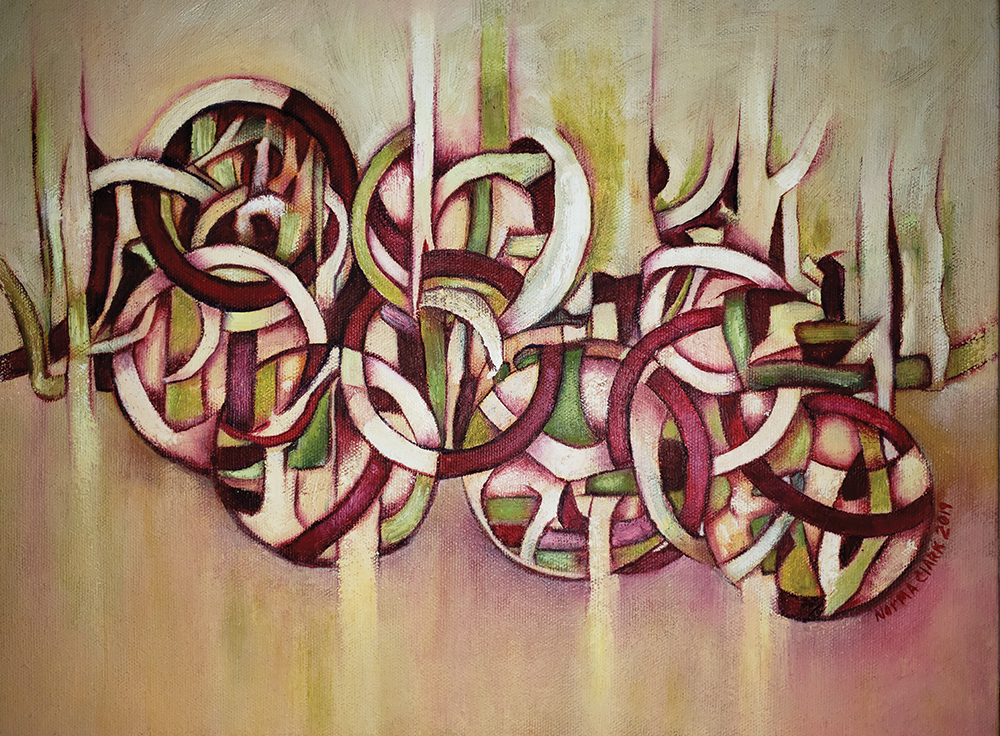 Featuring evocative imagery, such as arterial tendrils enveloping almost illusory circles in Circles Five I and II and the interleaving of geometric and organic shapes in Emotion, the highly personal works on display captured what Clark calls “ambiguities of space, color, form, and chaos—but a coherent kind of chaos.” She explains her philosophy of art this way: “Creating art for me is to look beyond what can visually be seen, to communicate a powerful image on canvas that reveals more than what is immediately apparent. However, my art is not meant to relay a personal philosophy or any political, social, or cultural commentary on the world.” Instead, her use of overlapping lines, glazes that create a transparency effect, and layered colors and textures is intended to reflect the artist’s rich range of emotions and the complexities of her life. “My paintings allow me to express a personal journey of transformation,” Clark says. “Each time I paint, I grow and learn something new, and the work itself just tends to transform as I’m evolving.”