Finals week is one of the absolute worst things about college. There’s really no other way to put it. It’s an entire week when you can have upwards of four different tests that cover information from an entire semester’s worth of learning. It’s absolutely terrible. To make matters worse, some of your tests might even be on the same day, so now you have to study for both tests at the same time. How is that even possible?

Personally, I think we all just need a nice little study break during this sad week before our winter and/or summer break.

Maybe this study break could involve some food. Breakfast items would absolutely slap: some eggs, bacon, and cinnamon rolls. Yeah, let’s do that, but let’s eat breakfast for dinner because we’re college kids and can do what we want.

OK, but I feel like we need some type of entertainment while we’re eating to help get our minds off all this studying that we’ve been doing. Karaoke would be a huge hit. Let some of our fellow peers go make a fool of themselves singing some random song that we haven’t heard since junior high while we munch on some pancakes that President Burger just served up? I can’t think of anything better.

Now, let’s do it Tuesday at 10:00 p.m. during finals week so it’s not so late in the week that most students are home already and so most students aren’t already burnt out from studying and tests.

OK, so what are we going to call it to get students interested? Well, it’s breakfast, and it’s late at night, so …

Oh, Southwestern already does this? Same time and everything? Oh, dope.

You know the vibes

Late-Night Breakfast has been a tradition at Southwestern University for a long, long time. Before President Burger taught math on YouTube, before students ever started sacrificing food to Monstrance, and before the Texas government gave our original name of Texas University to some burnt-orange school that sits on 40 acres to the south of us, SU students were eating and singing all night long at Late-Night Breakfast. Think about that for a second. Do you realize how many eggs have been served, how many pancakes have been flipped, and how many notes have been sung off pitch? Each of those has to be at least three each. There really is no better place to be in Georgetown, Texas, at 10:00 p.m. on a Tuesday night. You get free food and free entertainment. It’s most definitely a win–win situation. 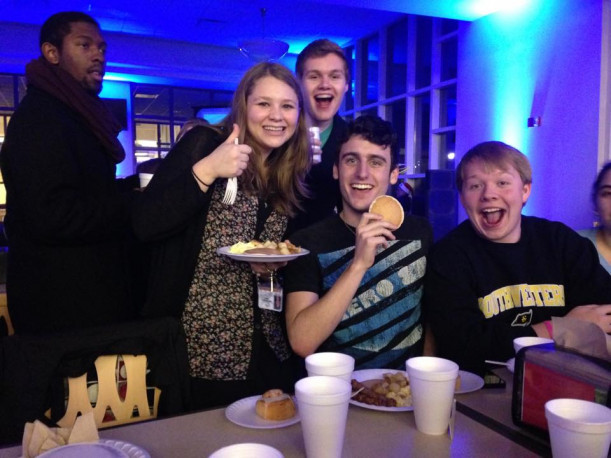 Can you imagine the Late-Night Breakfasts of yesteryears, like back when SU was founded in the 1840s? I’m sure those students sang a mean rendition of “Yankee Doodle” while snacking on some porridge and bread crumbs. What about the Late-Night Breakfasts in the roaring ’20s? I bet students didn’t even sing; they just played the saxophone and did the Charleston dance the entire time. But what about the 1950s and the early era of rock ’n’ roll? I’m sure there are some alumni on PirateConnect who can attest to just how fun singing “Yakety Yak” and “Blue Suede Shoes” was while everyone sat outside in their leather jackets smoking a cigarette. Or what about the 1970s? Yeah, I think it’s best that we skip over this decade, too. Oh man, but what about the 1990s? Karaoke must have been intense, especially with all the songs that were dropping at this time: “Return of the Mack,” “Smells Like Teen Spirit,” “No Scrubs,” and “Ice Ice Baby”—wow, I bet those were some crazy times. Just thinking about it is making this author want to bust out some jorts and rep some bleached tips in my hair.

The point of all of this deep history is to show one important thing: Late-Night Breakfast has been a tradition at SU for a long time, and it has given students the opportunity to take a break from finals and have some fun with friends.

Check out some of our favorite karaoke moments from previous Late-Night Breakfasts, including President Burger singing “Don’t Stop Believing” and the author of this piece, T.J. Vela ’19, singing “Thousand Miles.”

Late-Night Breakfast wouldn’t be as iconic and as loved as much as it is if students didn’t sing any songs. Trust me, I know how intimidating it can be to get up in front of your peers to sing a quick song, but once you’re up there it really isn’t bad at all. If you don’t think you can go by yourself, grab a friend, and go sing a duet! Or better yet, grab a whole bunch of friends, and sing a song that you all love. There are no rules and no guidelines. This isn’t a competition, either (except for the choir kids; yes, we know your motives).

If you still don’t know what song you want to sing after scrolling through your phone’s entire music library and debating about which song you’d kill with your friends, I’ve got your back. Here are 10 songs that are relatively easy to sing, span a variety of genres, and are guaranteed to be a crowd favorite no matter how good or bad you sing:

So, now that you’ve got a good understanding of Late-Night Breakfast and just how awesome it is, make sure to be there and join your fellow SU peers as we take a much needed break from studying for finals to enjoy a fun night full of breakfast food and great—no, good, no, mediocre, actually pretty OK—singing.