SU’s Center for Career and Professional Development offers students more than just help on a résumé; they offer a tailored approach to your career.

April was a good month for the Established Men Promoting Intelligence, Respect, and Efficacy (E.M.P.I.R.E.). For the second year in a row, the group earned Southwestern University’s Student Organization of the Year Award in recognition of their mission to break down racial stereotypes and serve as positive male role models on campus and in the local community. Then, on Saturday the 28th, E.M.P.I.R.E. hosted their successful fourth annual CommUNITY Cookout on Southwestern University’s Academic Mall. Students, faculty, staff, and their families as well as local Georgetown citizens indulged in a variety of fare, including crawfish, burgers, and desserts, while playing board games and volleyball, tossing frisbees, and testing out their line-dancing skills.

“It’s our biggest event but also our most fun,” says Markell Henderson ’19, E.M.P.I.R.E. cofounder and former president. “It’s great because people come together and have fun, sitting at these long tables with people they don’t know. It’s such a great time.”

Given E.M.P.I.R.E.’s many accolades and their reputation on campus as both respectful and respected, you might not expect that they’re a relative newcomer among student organizations: it has come a long way since its inception in fall 2015. The group grew out of a conversation among nine African-American student–athletes who were members of Southwestern University’s football program. “We thought, ‘What if we created an organization where we could bring cultural awareness and a new sense of community to campus?’” Henderson, a business and economics double major, recalls. The students began meeting to share their experiences, and with the help of Dr. Alicia Moore, associate professor of education, the group became an official student organization in January 2016.

The members of E.M.P.I.R.E., who now number around 30, did initially face some challenges, not only because they had to build the organization from scratch but also because those unfamiliar with their group expressed concerns that the organization was exclusively for African-American men. However, Henderson says, “What we really wanted to do was show that African-American men and other minorities on campus have more to offer than just our athletic abilities. We can share our cultures and all have a great time together… . With E.M.P.I.R.E., we’re working on growing and developing together through a sense of brotherhood, helping each other evolve.”

Blair Orr ’20, a business major and communications minor, remembers learning about E.M.P.I.R.E. and reaching out to Henderson during his first year at Southwestern because he was excited by the organization’s commitment to multicultural and community service.  This past spring, he succeeded Henderson as president of the organization. “We want to continue breaking down stereotypes,” Orr says. “With all our members, regardless of race, we want to build skills like intelligence, respect, and efficacy—skills that men on campus need to be successful moving forward in the real world. We offer many opportunities for members to communicate with others, have an impact on campus and off, and get things done.” 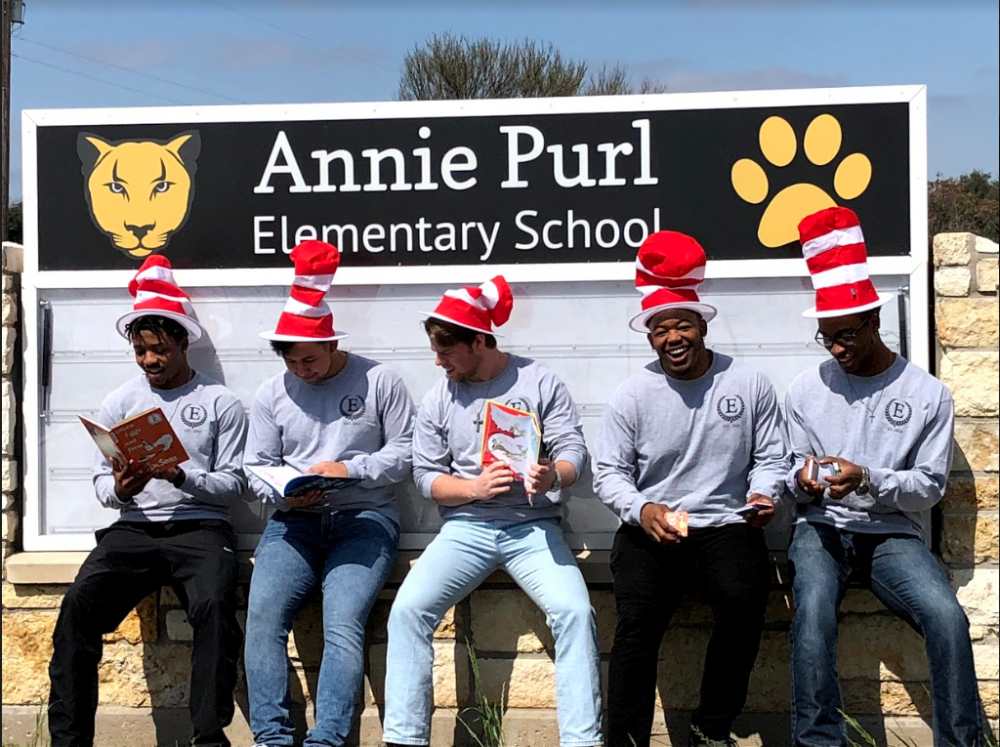 Those opportunities have included a wide range of events beyond the popular CommUNITY Cookout, including a costume ball, holiday raffles, a Thanksgiving food drive benefiting the Caring Place in Georgetown, and a service project at Purl Elementary School in which E.M.P.I.R.E. members read to students.

For business major Mason Biggers ’21, who also joined E.M.P.I.R.E. his first year and has served as social chair and secretary, the organization has been “a great way to serve the community through philanthropic activities and show that we are inclusive even though everyone is from different walks of life.” He also appreciates that the group has helped him meet more people and become closer to the people he knew before they joined the organization. 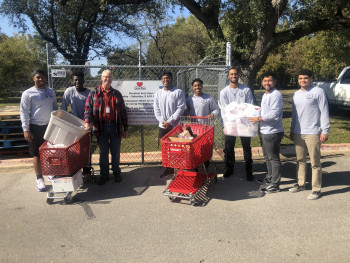 E.M.P.I.R.E. members help at the Caring Place in Georgetown.Elrick Bonner ’19, a communications major, environmental studies minor, and E.M.P.I.R.E. treasurer, notes that promoting, planning, and coordinating events have helped instill a sense of the importance of professionalism in the group’s members. But he also just appreciates the camaraderie at E.M.P.I.R.E. meetings, saying that “75% of the time, people are saying something funny or laughing.”

Henderson, who transitioned from a leadership position to an advisory role at the end of the fall semester, believes that he has benefited in so many ways, personally and professionally, from the group. “I think what I’ve gotten out of E.M.P.I.R.E. is a sense of sense of purpose,” he reflects. “We created this out of nothing, and to be able to share our culture and learn from other people has been incredible.”

For example, during Black History Month, the organization hosted a an event featuring a traditional African-American meal and line-dancing. “That’s special because I know that we were able to give someone an experience that they might not have had otherwise and be able to share those experiences and stories with others,” Henderson says. He also values E.M.P.I.R.E. because it has enabled students to have difficult but necessary conversations about controversial topics, such as police brutality. “We were able to come together and have a serious dialogue about issues we felt strongly about and hear the perspectives of others,” he remarks. “Being able to do that has been phenomenal because those sorts of conversations are important—and the way that you have them is important as well.” 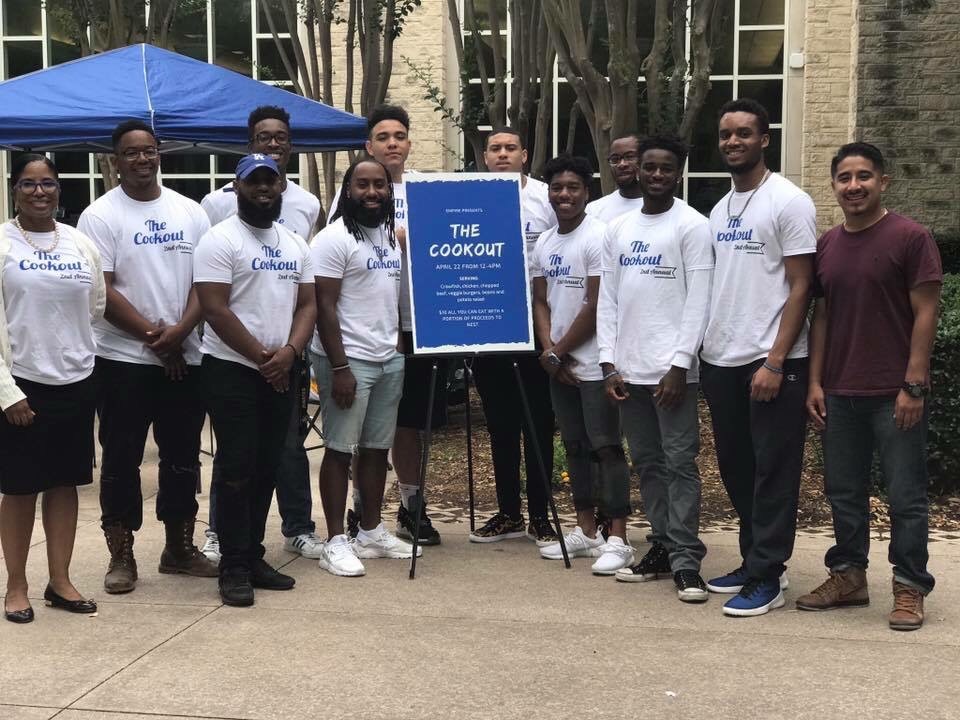 E.M.P.I.R.E. at their annual CommUNITY Cookout.

Finding a niche on a small campus

Facilitating those dialogues is a cornerstone of the University’s philosophy, as E.M.P.I.R.E. members and other students will attest from their classes and other campus programming. “The school has been very supportive in helping us create the organization and promote our events, with professors encouraging students to attend,” Henderson comments. Orr adds that Southwestern’s size has enabled students to create a group like this, where members can enjoy one-on-one relationships and feel like they belong, unlike what some might encounter at a large university.

But perhaps the most significant reason E.M.P.I.R.E. has had an impact on members’ lives is that it provides a home within a home—a space within SU’s intimate campus where especially underrepresented students in particular can find support and positivity. Biggers says that the group filled a gap at Southwestern for especially students of color, providing a fun, comfortable space where people can find their niche if they haven’t found it elsewhere on campus. Bonner adds that the organization is in some ways an alternative to the University’s fraternities, offering a space where people of color can feel comfortable and where Southwestern men “of different races talk about the issues and help improve race relations [with] the goal of contributing to Southwestern and to the community.”

Henderson points out the flip side of that coin, which undergirds E.M.P.I.R.E.’s mission of spreading intercultural awareness: “If these are the only encounters a person has with someone of a different ethnicity or race, it’s almost as if we have a duty to show them that people of different races and ethnicities exist beyond what we see in the media, whether [those representations] are good or bad. We’re here to show that individuals within those races and ethnicities do a wide variety of things and have a wide variety of things to offer.” 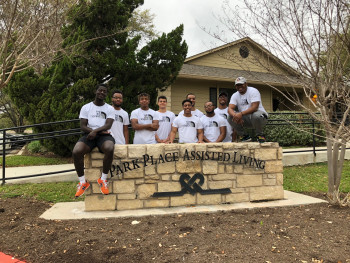 Although Henderson is graduating this spring and heading to Chicago this summer to become an investments associate at Northern Trust Corporation, he’s certain that he’ll “forever be part of the organization,” especially considering that E.M.P.I.R.E. maintains close ties to its alumni. He admits that it’s been tough watching new leaders take the helm, and he knows engaging from afar will require even more adjustment. Understandably, he speaks of leaving E.M.P.I.R.E. the way some parents express their mixed emotions when their children go off to college: “I feel like this is like my baby. I served as vice president my first semester and as president until last semester, so I have a deep connection with this organization and all the guys in it.”

Nevertheless, like a proud parent, Henderson looks forward to seeing where current students take the organization. “It’s really something special to build something—to create it and then bring people into it who have that same love and desire to carry on your work,” he says. “I’m certainly going to miss it, but I know they’re going to do great things.”