Check out all the sights of Homecoming 2019.

more information
Home» News» Looking out for the Community

Looking out for the Community 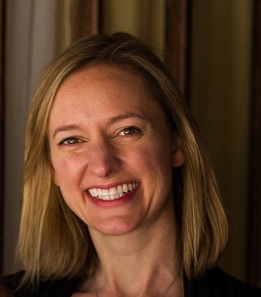 When Megan Schubert Leese ’01 was a high-school student in Abilene considering colleges, her counselor recommended that she apply to Southwestern. “My counselor told me it was a warm, nurturing community where people would look out for you,” Leese recalls. Little did she know that becoming part of that tight-knit, welcoming campus would eventually encourage her to choose a career in which she constantly gives back to the community.

Having attended a rather large high school, Leese was originally drawn in by Southwestern’s small size and the way the University would enable her to continue pursuing activities that had become important to her, including choir and cross country. Majoring in biology and Spanish “was always the plan,” she says, as was pursuing the premed pathway, “like many starry-eyed high-school seniors.” Her goal after graduation was to become a doctor serving Spanish-speaking immigrant communities in the U.S. or else traveling abroad and practicing in a Hispanic country.

During her years at Southwestern, Leese was excited to take the opportunity to fulfill her wishes to travel and integrate her majors. During one spring break, she participated in Destination Service, a predecessor of today’s Spring Breakaway, in which SU Pirates engage in volunteer work during the school holiday. She traveled to Honduras with approximately eight or nine other students in conjunction with the Medical, Eye, and Dental International Care Organization (MEDICO), a Georgetown nonprofit humanitarian organization that, among its many efforts, sends short-term medical mission teams of volunteers and professionals to other countries to provide healthcare services to those in need. 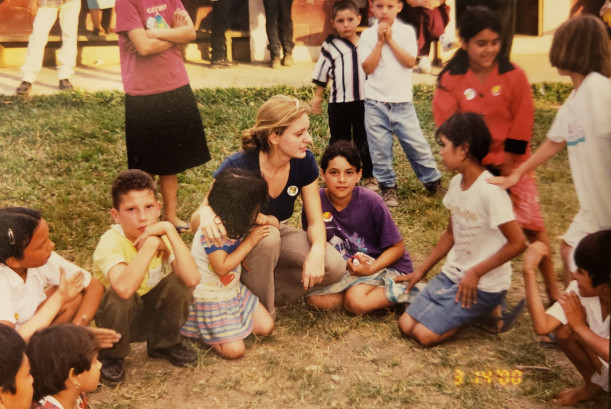 Leese in Honduras with with the Medical, Eye, and Dental International Care Organization (MEDICO).

During this particular service trip, the group visited impoverished villages, where scores of residents would line up to be seen by the doctors and dentists. Leese served as a medical interpreter and health educator: the doctors would explain to her what they were doing in lay language, and Leese would translate these simplified explanations into Spanish for the patients. “It was fantastic and so great for me. It was a very formative experience to see what medical care was like in those circumstances,” Leese comments—circumstances that included tending to patients in a converted school with no electricity and a child complaining of ear pain who ended up having an insect removed from his ear canal. At one point, Leese even “had to pull a child’s tooth” because “the dentist was too tired after pulling teeth all day long”—an experience not many undergraduates would have or even want. But Leese managed to wiggle the tooth loose, much to the little girl’s relief. 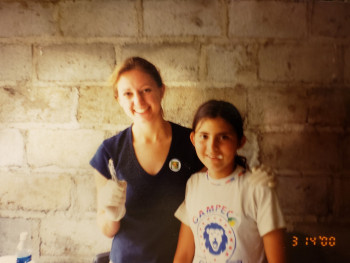 Leese with the child and the tooth she pulled.One of the physicians Leese worked with was Dr. Douglas Benold, who attended Southwestern from 1940 to 1943 and decades later served on the University’s Board of Trustees. Even today, Georgetown residents recognize Dr. Benold as having helped establish the Georgetown Hospital and Clinic and later the Georgetown Community Clinic, but Leese remembers him fondly as part of an “amazing medical team. … I adored him on that trip.”

Although Leese deeply admired and grew fond of Benold, the dentist, and the rest of the medical professionals during the Honduras mission, the trip helped Leese see that she no longer wanted to be a physician after all. “That whole experience showed me what having no public-health infrastructure looked like,” she reflects. “I realized that I could work as a doctor to serve a few people per day, or I could work in public health and change things at a systematic level.”

So instead of taking the MCAT and applying to med schools, after graduating from SU, Leese moved to New York City as an AmeriCorps volunteer and began working at Hudson River HealthCare, working to improve healthcare access and outreach in migrant communities as an interpreter and community educator and then later as an administrator. She stayed with the organization for more than five years, and while working full-time, she pursued her master’s in public health from Columbia University. “Thanks to Southwestern, I was certainly ready for an academically rigorous program like Columbia’s,” Leese says. Since earning her master’s, she has worked in various capacities within the healthcare system, serving as an administrator with hospitals, healthcare networks, and Medicare payers. “It’s very rewarding,” Leese says. “I really enjoy learning the ins and outs of how we provide care to the people in our country. It’s changing so rapidly, and there’s always something new happening.”

Leese still nurtures close relationships with lifelong friends from her college days. She also maintains her connections to her undergraduate alma mater by serving as the president of the New York City chapter of the Southwestern Alumni Association, a post she’s held for the past 12 years. She’s enjoyed the social connections she’s made, and she has “called on it for professional reasons” as well. As she looks back on her time as an undergraduate at the University, she warmly recollects a “wonderful experience” with “great mentors” such as Dr. Kenny Shepherd, retired professor of music; Francie Larrieu Smith, retired head coach for men’s and women’s cross country and track and field; and Margaret Dunaway, former associate professor of Spanish, who taught the Medical Spanish course that Leese benefited from during her service trip to Honduras. She still keeps in touch with many of her SU professors. “They were always available and always took the time to pursue academic ideas with you, whatever you wanted to learn,” she says warmly. “They are great human beings and teachers.”

Ultimately, Leese attributes much of her career journey to SU. “Southwestern introduced me to various ways of realizing my desire to contribute to the community and be helpful to society,” she reflects. She hopes that current students and recent graduates recognize that they, too, can pursue multiple fields of study and multiple career paths, in large part because Southwestern is a place that champions interweaving different perspectives, different disciplines, and different experiences—both academic and cocorricular. “You can do so many things, and there’s room for lots of different interests and seeing how they work together,” Leese says. “Get out there. Ask questions. Look into things. … If you can carve out your spot, you can find lots of opportunities.” Through her years of dedication to public-health administration and her efforts to improve access to healthcare at a systems level among immigrant and other communities, Leese is certainly a successful example of that very idea of bringing together a range of interests in the service of society.