Looking out on the Cataratas del Iguazú, the largest waterfall system in the world, Armando Vidana ’19 felt awed by the vibrant colors, the capuchin monkeys and coatis, and the people from multiple cultures walking about. “It’s like a religious experience … If I had to choose one place, I’d definitely do that again,” he says of the Iguazú Falls, which straddle the borders of Argentina, Brazil, and Paraguay.

Vidana’s trip to the cataract, which is three times the height of Niagara Falls, was a favorite excursion during his seven-week study-abroad program in Buenos Aires, Argentina. The experience, which is hosted by Academic Programs International (API) and designed exclusively for Southwestern students, was made possible by a Moody Grant. Thanks to this generous support, Vidana, a Spanish and political science double major as well as a philosophy minor, had the opportunity to study intermediate Spanish, tour local neighborhoods on foot and bike, and visit the Latin American Art Museum of Buenos Aires while living and enjoying meals with a host family. 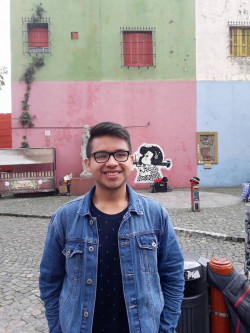 Beyond the API classes, Vidana recalls, “I learned a lot more exploring by myself [and] talking with different types of people.” Wearing a backpack or finishing up homework in a coffee shop or restaurant seemed to invite locals to strike up friendly dialogue. These exchanges usually began with questions about what he was studying and quickly moved into discussing issues of intercultural identity and the differences between the American and Argentine education systems. Some travelers might balk at such topics, but these are the kinds of conversations Vidana has always enjoyed exploring: He’s studying political science and philosophy largely because he enjoys discovering new perspectives and thinking about difficult questions with multiple answers, such as “who are you?” and “what’s your identity within society?” Of the strangers he met, Vidana recalls fondly, “They were so nice. Everyone has their own opinions or definitions, [but] they genuinely want to have conversation with you … about philosophy and ideology.”

The greatest challenge of the language-immersion program for Vidana? “Really trying to force myself to get out my comfort zone. You think you might know the language after studying it, but actually engulfing yourself in it and speaking it in a foreign country is difficult.” Learning what he didn’t know—such as in-depth grammar and other technical aspects of the language—was the most significant impact of the academic program. But acquainting himself with the nuances of Spanish, especially considering differences in local dialects and context-specific colloquialisms, required substantial patience and persistence. For example, during a competitive game of soccer, Vidana was told, “tomátelo con soda,” which literally translates as “take it with soda.” In the moment, he didn’t understand why he was being told to drink a carbonated beverage, but he later learned that the phrase means “chill out” or “calm down.” Vidana may have picked up some Spanish at home and studied it academically for five years, but living abroad and assimilating the language among native speakers while adapting to Argentine culture helped Vidana truly improve his fluency.

Outside his Spanish and political-science classes, Vidana also made an effort to engage in local culture during his time in Buenos Aires. He tried out a salsa club and discovered the Mate Club de Conversación, where native Spanish and English speakers gathered weekly to meet new people and improve their language skills over the traditional South American beverage. Vidana became a fan of the caffeinated drink, which is brewed by steeping dried yerba mate leaves in hot water within a hollowed-out calabash gourd, and has brought the custom back with him to campus. He’s also returned to SU with the spirit of the Mate Club: “always learning, always asking questions.” 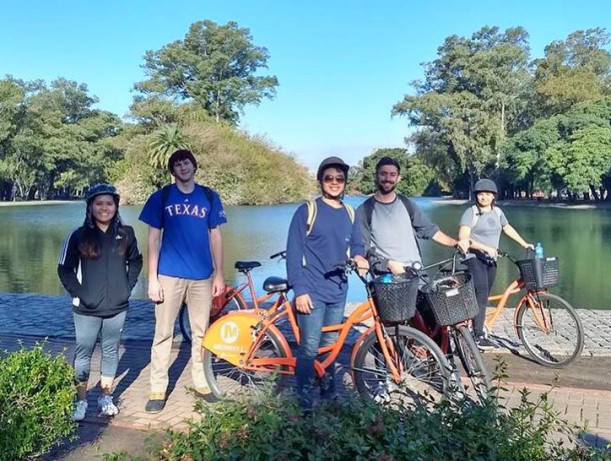 Vidana is grateful to have made lifelong friends and built a relationship with his host family, who have become part of his close-knit circle. He notes that unlike in the U.S., having time to share stories over hours-long dinners of delicious local cuisine allowed him to expand his worldview, and he appreciated the honesty with which his newfound friends would express their emotions in any given moment. He’s trying to translate that Argentine habit of getting beyond common courtesies to engage in more in-depth dialogue into his conversations with friends at SU and family at home.

“Don’t say no to an experience. If you’re provided with a chance to do something that’s out of your norm, definitely do it.”

He’s also encouraging other students to apply for Moody Grants so that they, too, can achieve a more diverse, intercultural perspective. To future applicants, Vidana advises, “Don’t say no to an experience. If you’re provided with a chance to do something that’s out of your norm, definitely do it.” In the meantime, Vidana is looking forward to extending what he learned in the Buenos Aires program. After graduation, the future may find him teaching English abroad, going to law school, or applying for the U.S. Air Force Judge Advocate General (JAG) program—or all of the above. Wherever he travels next, Vidana is sure to bring his adventurous, philosophical spirit with him.

Armando’s experience was made possible by a generous grant from the Moody Foundation.