more information
Home» Special Collections» The Rarest Menu of Them All

The Rarest Menu of Them All 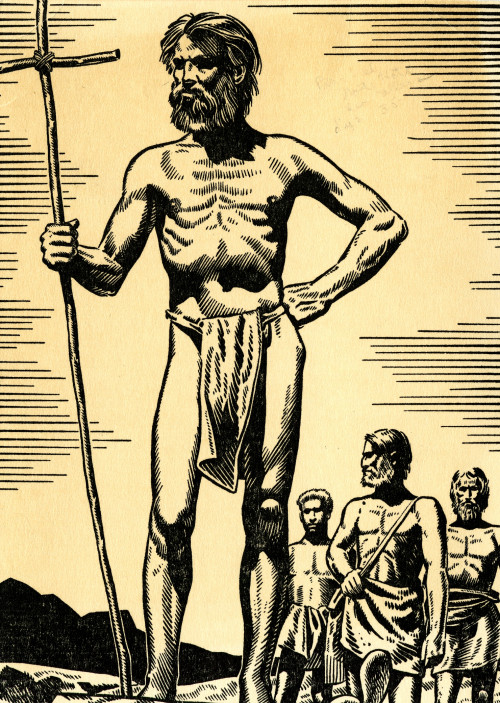 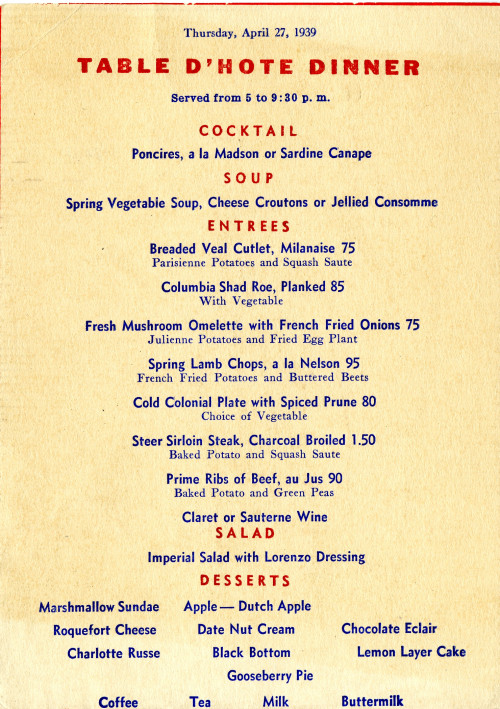 For our post today, which will be my final one for this blog, we are talking about a menu. Readers of this blog and those familiar with Texana will likely recognize the artist, but the story behind this menu and its connection to other Texana books is a story worth retelling - some of the items in this post exist in only one copy (ours), and the tale that binds these items together is of note.

The menu above, known in only this copy, is from the Hotel Paso del Norte, located in El Paso, Texas. The illustration on the front of the menu is by Tom Lea, a frequent subject on this blog. I must admit that the choice of an emaciated man is a bit of an odd choice for a menu, but Tom Lea and his friend and frequent collaborator, Carl Hertzog, worked with the hotel in the past, creating two brochures. Those brochures represent the earliest work that Lea and Hertzog produced together. Special Collections holds both of those brochures, which you can access here and here.

Why the hotel had these Tom Lea illustrations for their menus is really the subject of this post.

In 1938, the year before the dinner on the menu above, Lea and Hertzog conceived of a book to acquaint El Pasoans with their community’s rich history. Of course, as with most of their collaborations, the product was not a modest or underwhelming affair. Instead, this project produced what Al Lowman called “the greatest of the Lea-Hertzog collaborations.” However, at the time of the genesis of the project, both Lea and Hertzog had not found the financial security they enjoyed later in their careers, and so needed funding for this as yet unnamed project about El Paso’s history.

To that end, Hertzog (with Lea’s permission) sold four of the drawings Lea created for the book to the Hotel Paso del Norte for use as menu covers. This is one of those menu covers, and I should state again, the only one known to exist.

The funding from that sale did not cover all expenses related to the project. There were sufficient funds for press proofs and advertising dummies to be made. Lea and Hertzog approached local sponsors with these dummies and proofs, hoping to secure more funding for the production costs associated with the book, but met with no success. After this poor reception, the project was set aside, but the type was left standing. Subsequently, the hotel purchased three more of the Lea illustrations.

It was not until 1946 that the president of the El Paso Electric Company, F.C. Womack, was so impressed with the project that he contracted to purchase the first 250 copies of the book, which financed its production. Hertzog borrowed the illustration cuts from the hotel, originally proposed printing the 12 drawings by Lea in black and white by letterpress with the type. However, in order to achieve a sufficiently dark black on the page, hairlines appeared in the illustrations. Lea proposed using a tint block behind each image, with the subject highlighted in white. The images were produced using offset, and the type was printed letterpress by Hertzog. 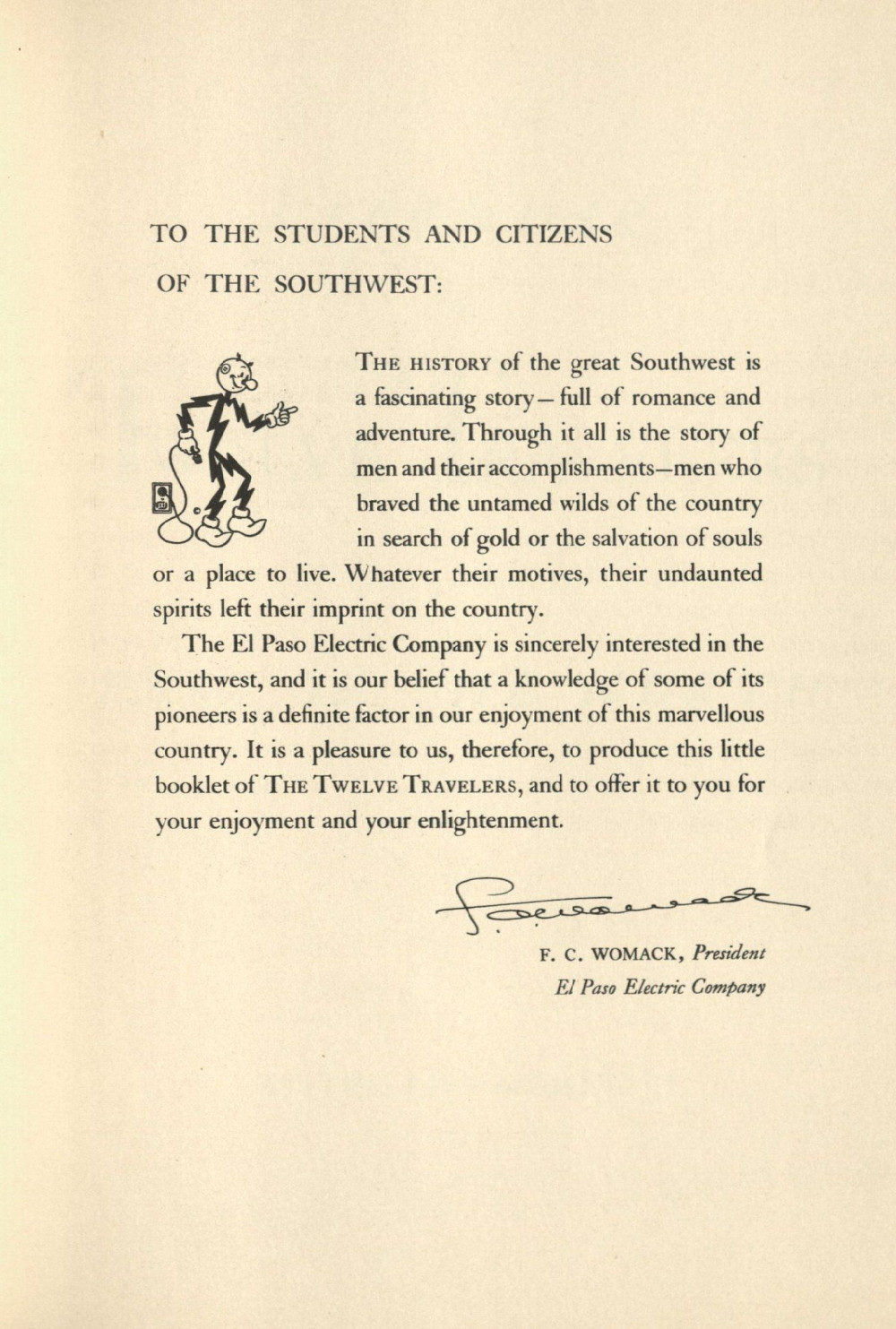 Introductory text from the 1947 offset reproduction.

This letterpress printing was not straightforward. Hertzog only had enough standing type to print three pages at a time. This required Hertzog to print 365 copies of those three pages, break up the type, re-compose it, and print 365 copies of the next three pages. Also, he had only T, F, and W as the initial letters, requiring some re-wording of the text. The A was borrowed from another printer for the last entry. Also, note the full size image of Cabeza de Vaca from the book in the image below. 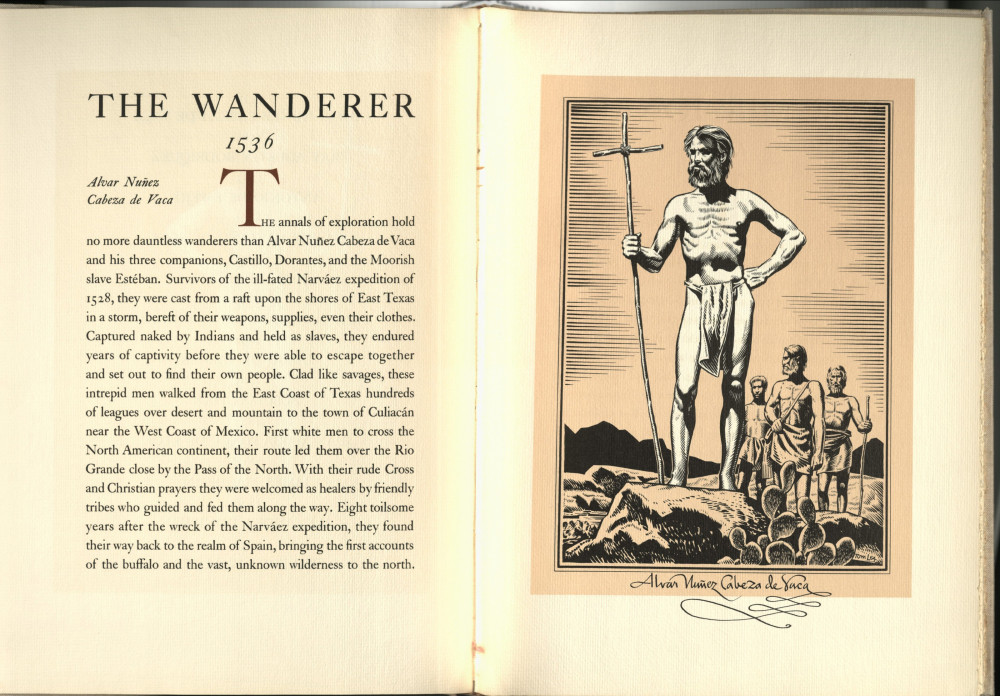 The resulting book, perhaps because of these difficulties, is stunning. The text is set in Caslon Oldstyle, with the text and illustrations in two colors. Calendar of Twelve Travelers Through the Pass of the North, in this limited (and first) edition of 1946 commands a premium price on the market today, thanks to the story of its production and the remarkable beauty of the product. Hertzog was pleased, but remarked that his book dealer friends thought it would fetch 100 dollars at some point in the future - which Hertzog did not believe. Good copies of the book regularly sell for ten times that amount today. 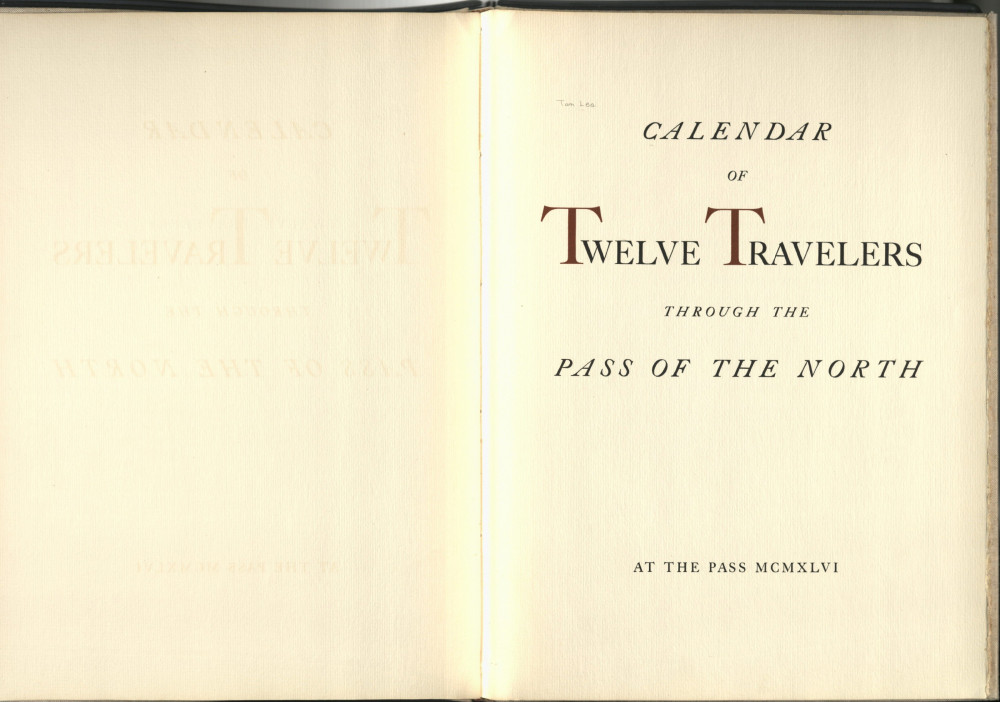 The 1946 printing was not the end of this title, however. In 1947, the electric company sponsored the production of 25,000 photo reduced copies of the book for the students in the public schools in El Paso. We have one of these 25,000 copies with notes from Hertzog talking about the overall project and the reproduction: 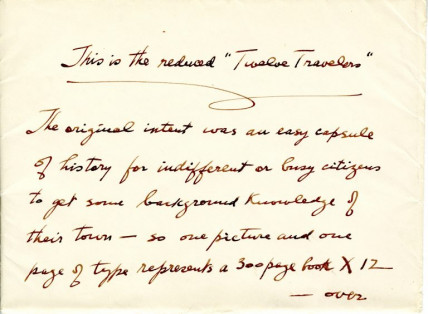 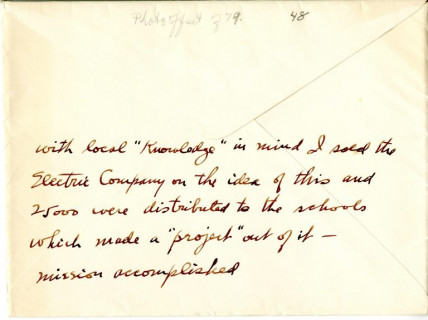 150 copies of that 25,000 were printed on fine paper - 100 on white all rag paper, and 50 on ivory mouldmade paper in limp buckram. We recently acquired one of the 50 copies on ivory paper, the only copy known to exist, and significantly harder to find than the 1946 printing: 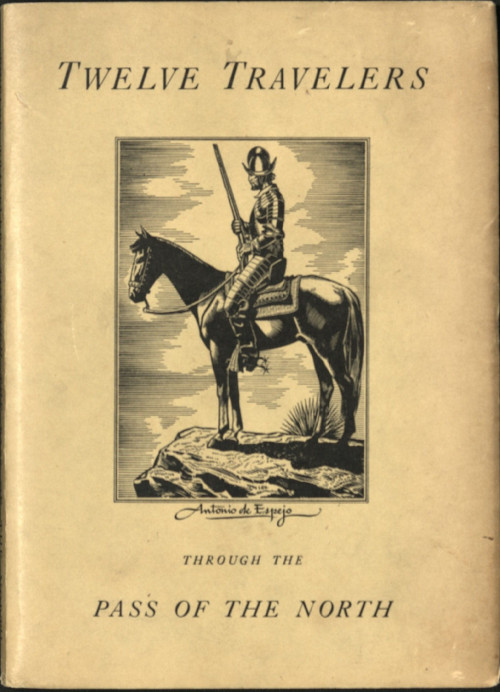 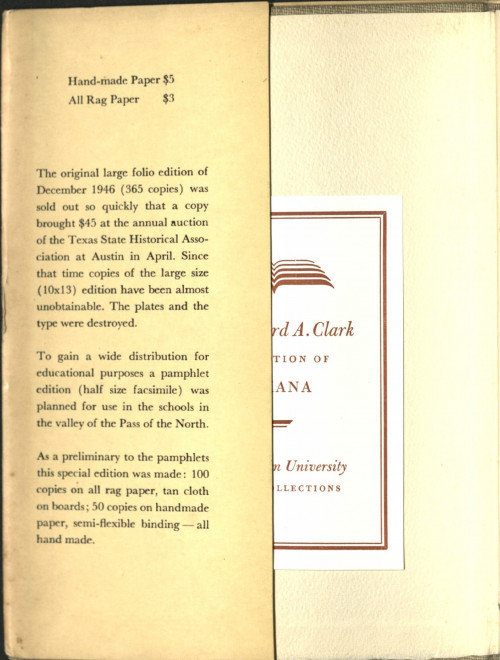 This story is one of my favorite Lea-Hertzog stories, and I am so pleased that we have the items that bear witness to this story. We are fortunate to have such a deep and rich collection of Carl Hertzog, and it has been my pleasure to develop that collection at Southwestern and share it with all who want to engage with it.