SU’s Center for Career and Professional Development offers students more than just help on a résumé; they offer a tailored approach to your career.

SU honors four outstanding members of the campus community with the 2020 Mundy Awards and recognizes those who have achieved milestone anniversaries with the University.

more information
A History Major in the Nation’s Capital

Kandace Lytle ’07 combines yoga with writing to connect and heal.

Gearing up for College Move-In Day

Is it too early to start planning for college move-in day? No. But don’t panic! Here’s some savvy advice for students—and their families—on how to prepare.

Can you hear that? Retail stores are beginning to trumpet their back-to-school sales, which means college move-in day is right around the corner. For first-year university students and their parents, it’s a time of year filled with excitement and pride tinged with a few jitters—and maybe even a little sadness. But as the realities of embarking on the college experience loom large, creating a thoughtful plan for moving to campus can help alleviate some of those anxieties. Here are some helpful tips for making the big transition as stress-free as possible. 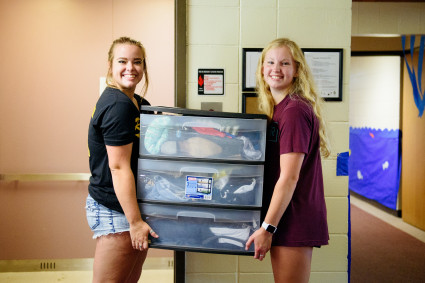 If you’re feeling overwhelmed by the prospect of the new academic year away from home, try some consumer therapy! Now is the time to take advantage of coupons and other deals on essential school supplies, such as pens, pencils, notebooks, tablets, and laptops. Shopping now is better than buying later: you don’t want to risk important items selling out during the mid-August rush.

You’ll also want to purchase some basic residence-hall furnishings, including those all-important hangers, laundry hampers, and power strips. Snazzy towels, pillows, and bed linens can show off your personal style, but unless you enjoy getting ensnarled in excess swaths of Egyptian cotton, you probably don’t need California king–size sheets, so check with your school to find out which size you do need.

There are numerous websites that list what to buy and what to avoid, including the FAQ from your university’s residence life office, but you should contact your future roommate(s) to coordinate room setup. This is a great opportunity for getting acquainted with your roommate to preempt any social awkwardness on move-in day, and you have the added bonus of avoiding duplicates of larger items, such as minifridges, microwaves, and 52-inch plasma TVs. You might also want to coordinate different move-in times so that you and your roommate’s families won’t be tripping over each other on the day.

Start to pack at T minus two weeks. You’ll be receiving many free T-shirts in your first year of college, so you probably only need to pack a few favorites. If you’re moving out of state and won’t be traveling home until Thanksgiving, pack clothing for fall and winter in the climate you’re moving to (e.g., Montana in late November is just a tad chillier than Texas at the same time). But don’t overpack; unless it’s a Tardis, your dorm room is not going to be bigger on the inside, and you’re probably sharing the space, so remember that you can always purchase items after you’ve settled in. In general, unless you’re flying and are limited to suitcases, pack using vessels that will be functional throughout the school year: backpacks, messenger bags, duffels, plastic bins, and even garbage bags. Think Russian matryoshka dolls to save space: try nesting smaller items inside larger items, such as socks and underwear inside shoes and boots.

Finally, create a game plan for the day: Are you making the trip by train, plane, or automobile? If you’re moving across the country, you’ll probably want to arrive a day or two in advance to collect items you’ve ordered for in-store pick-up. Who’s helping Johnny or Jenny haul their stuff up three flights of stairs? (Pro tip: Many schools, like Southwestern, will have student volunteers assisting with first-year loading and unloading, so bringing an entire crew with you wills just congest stairwells and hallways.) Are families just there to help with the move itself and then taking off so that students can get settled in on their own, or will the family go to dinner before saying their farewells? Setting expectations will help everyone manage their emotions a bit better when it’s time to part ways. If you anticipate getting a bit too choked up in the moment, consider writing your thoughts and advice in a card instead and exchange them to be read after you’ve gone your separate ways. 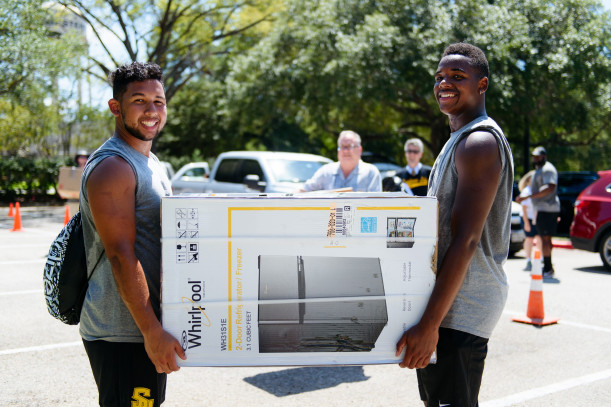 On the morning of, tape any storage drawers or boxes, and secure any bags carefully—move-in spills on the stairs are a pain, but flyaways from the luggage rack on the roof of the car or from the bed of the truck can be catastrophic. Next, pack those last-minute items in an overnight bag. Pay attention to the things you use during daily routines so that you don’t forget them: mobile phone and charger, hair- and toothbrush, toiletries. You’re going to want to pack your pets, but unless companion animals are allowed in your residence hall, you’ll have to resign yourself to giving them lots of hugs and pats. If you cry, we won’t judge you.

Now, let’s be brutally honest: unless you’re slacking or you’re moving in a geographical region with a halcyon climate, there will be sweat—possibly copious amounts of it. Dress for the weather, wear comfortable shoes, and have lots of water and maybe some snacks at the ready. Batteries, a doorstop, scissors, tape, a toolkit, and cleaning wipes are also nice to have handy when you’re unloading and unpacking. If you’re local, a collapsible cart or dolly is a backsaver.

Make sure you’re aware of when the residence halls are accessible to you—many schools schedule specific arrival windows for specific groups of students to alleviate the chaos. Plan out the route to campus, preparing for traffic conditions and parking. Have some agreed-upon tunes or games to play in the car because there might be a few minutes spent sitting in long lines of vehicles.

It’s their room, so students should take charge of the moving process as much as possible, and families should assist as needed, including making a run to the store (hint: make a list first; otherwise, you’re going to end up driving to Bullseye Retail Chain six times, which can turn even the most accommodating personalities malevolent). Remain calm. It’s going to be OK. If you’re standing around unsure of what to do, consider getting phone numbers from roommates and/or their parents to stay in touch over the school year.

Arrange the furniture (as you’ve already agreed with your roommate!) to maximize space and/or privacy before you start crowding the space with boxes and bags. Trying to pivot beds and desks in a small space around personal belongings will likely end in frustrated tears and tantrums. And think like an interior designer: using wall shelving or under-the-bed storage with bed risers can help conserve floor space and keep things tidy, and modular stacking cubes can be reconfigured in later months or years. Always pay attention to safety when mounting shelving or lofting beds: you don’t want to wake up to your belongings—or your body—crashing to the floor at 2 a.m.

Finally, it’ll be time to sing that song from that ice-themed musical animated movie. Take your photos and selfies, agree on a schedule of texts and calls, and exchange your weepy and/or exhilarated goodbyes, but keep to your game plan. Exercise a little empathy: parents of only or oldest children might need an extra hug, students might need some confidence boosts or an escape from embarrassment in front of their new friends, and empty nesters might be eager to catch an international flight to Vacation Island. Don’t draw out the farewells; it’s best to greet this next stage of your lives with exuberant smiles. Don’t forget those cards if you wrote them.

Move-in day can be an overwhelming first step in a student’s college orientation, but it can be a fun and laughter-filled activity, too. With a little prep and cooperation, you can make the day a great memory for the entire family, one on which students and their loved ones can reflect proudly as a shared effort in helping a young adult embark on the next stage of their life.