Why Waste Your Time With a “Throw-Away” Degree 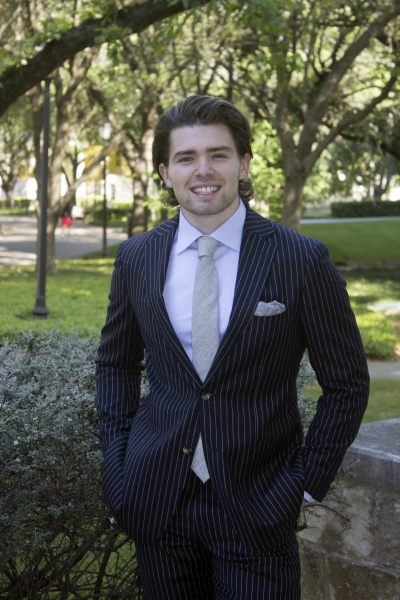 “I’m majoring in Classics.” A phrase usually followed by the question “why would you waste your time with dead languages” or “what good will that do for you in the real world?”

Gregory “Bear” Reeves ’17 has heard this question multiple times. However, Reeves attributes the majority of his post-graduate achievement to his “throw-away” Classics degree.

In an academic era highlighted by the reputational cascades of STEM, the arts and humanities seem to have lost their relevancy to the utilitarian institution. In a 21st century market society, the components for critical thinking, problem solving, and social competency present themselves as invaluable assets.

“Southwestern prepared me to draw connections and be relevant in a world of interconnectivity,” Reeves explains. “In truth, it is the arts and humanities that lend themselves most applicable in a world still reliant on culture and social interaction.”

Upon graduating from Southwestern University, Reeves sought to further his educational pursuits and made it his goal to pursue a law degree. Reeves didn’t want just any law degree, but was set on a law degree from a ‘Top 14’ (T14) University–institutions such as Yale, Harvard, Texas and Stanford.

There are thousands of students each year who compete for incredibly limited admission into a T14 law schools. Reeves had the GPA, LSAT test scores and undergraduate attendance that these T14 law schools were looking for, but he also had the degree – Classics.

“Where I have found and continue to find favor and success is in my degrees of study – Classics.”

“For all intents and purposes, my GPA and LSAT were stellar, as is generally required by T14 universities, but even these do not guarantee success in admissions. Where I have found and continue to find favor and success is in my degrees of study – Classics,” Reeves says.

Standing Out From the Crowd

He explains that within an application pool full of STEM students, difference often comes down to numerical and/or holistic approach. Yet for Reeves (and probably a few others) it has come down to degree selection which sequentially translates into the presentation of critical thinking, problem solving, and social competency. At the root of a Classics degree is the ability to ‘put oneself in the minds of the ancients,’ that is to draw intellectual, cultural, and social connections between that which has been separated by the barriers of time and space.

During the application process with the University of Texas Law School (ranked 13th), Reeves was able to use knowledge he gained from his Classics degree to help him through the interview process.

He encountered a situation that would have troubled him had he not experienced it before–a computer interview with no visible audience.

“During my undergraduate studies, I had the pleasure of participating in a rather unique course, Sunoikisis,” Reeves said. “The Sunoikisis course was generally an annual and bi-annual inter-institutional course interactively taught over the medium of both recorded and live video stream. Aside from the explicit benefits of interconnectedness, academic diversity, and course rigor, there appeared yet another: communication across media platforms that lack a visible audience.”

Reeves explains that students were often called upon to articulate thoughts and questions concerning the subjects for discussion. When students were discussing their thoughts, they were visible to audiences, yet they could not see the audience members.

“This invisible audience caused students to become hyper-sensitive to responses, as we were not able to gauge the reception of response that one can when interacting with a visible audience (often through social cues and expression). Having experienced the unique dynamics of such interaction prior to my Texas interview request, I was confident in my attempt.”

Within one week of the interview, Reeves received his first decision of the 2017-2018 law school admission cycle. An acceptance, which he partially credits to his classics degrees.

In addition to the University of Texas Law School, Reeves has also been accepted to Stanford Law School (ranked #2) on a full scholarship. This is an impressive feat considering Stanford Law only accepts 9.1% of their applicants.

Stanford Law School’s Dean Mary Elizabeth Magill sent a personal email to Reeves congratulating him on his acceptance. In her email she said “Your excellent record at Southwestern - both in the classroom and out - made your application a compelling one to us.”

“Your excellent record at Southwestern - both in the classroom and out - made your application a compelling one to us.”

This proves Reeves’ theory that admission offices are looking for people with different perspectives and who are passionate about what they do.

Reeves knows that his Classics degree helped him stand out from other applicants, but also wants to give credit to his second major, Communication Studies, for aiding in his law school application process.

One of the critical components of drafting a competitive law school application is articulating oneself both authentically and concisely–being a great writer. Before an interview is ever offered, the only thing that admissions committees have to get to know you is your essays and personal statements. These materials are imperative to the admissions process because they allow the University to get a feel of who you are.
Reeves explains that many law school students hire admissions consultants to evaluate and aid their application process, specifically their writing abilities and essays.

“I was not aware of this option until after having submitted applications,” Reeves explains. “However, I received praise from a few admission committees for my compelling essays. I have to attribute this almost solely to the Communications Department.”

Upon entering Southwestern, Reeves had both innovative and creative ideas, but struggled to articulate them on paper. Southwestern helped Reeves go from a poor writer to a great one through intensive writing seminars, sessions, classes, and one-on-one professor feedback.

“The Communications Department both nurtured and developed my ability to convey critical thoughts through writing–which is perhaps one of the most important skills that one can hope to acquire in college. And I believe that this is especially true at Southwestern.”

Southwestern, and Reeves’ ‘throw-away’ Classics and Communications Studies degrees, have given Reeves an inclusive education, one that taught him to think critically and substantively, always challenging his approach to everyday interactions and those involving higher thinking capacity.

So the next time someone is skeptical and asks you “what are you going to do with your ‘throw away’ degree?”, tell them “anything I want to do.”