As we reflect on Dr. King’s life and prepare to honor him with several upcoming events, a few Southwestern alumni reflect on their experience as a student in the late 1960s, and what Dr. King’s legacy means to them.

Rev. Roberto L. Gomez was a junior at the time of Dr. King’s death. He remembers many of the details vividly, even down to the music playing at a memorial on campus.

“On April 4, 1968, the entire Southwestern University community was shocked and horrified when we heard that Dr. Martin Luther King, Jr. had been assassinated.  We fearfully worried what would happen next in our country.  Five African Americans students (one junior and four freshmen) were students at Southwestern.  I remember wondering how they felt. A memorial service was held two days later, and Perkins Chapel was full to capacity. It was a solemn worship service of a litany, prayers, hymns, and special music. Worship leaders expressed words of shock, grief, and sadness. Prayers were offered of hope and of continuing Dr. King’s legacy for ending racism, poverty, injustice, and the war in Vietnam. Dr. Ellsworth Petersen played Bach’s “Toccata and Fugue and D Minor.” Dr. Petersen’s playing Bach’s powerful and majestic piece, so appropriate for that moment of anguish and despair, deeply moved the people in the Perkins Chapel.  Prayers for peace and justice ended the memorial service.  I have never forgotten the memorial service that took place at Perkins Chapel that evening.”

Larry Haynes was one of only a handful of African American students at Southwestern during the late 1960s. Larry gave a moving speech, “Living a Life that Matters” honoring Dr. King at an event on campus in 2014, during which he recalled watching The March on Washington for Jobs and Freedom on TV in 1963: “My grandmother and I were anxious, even fearful, yet proud to see so many Colored people with the courage to go to Washington D.C. for this march. Of course, then to hear Rev MLK speak to us with such eloquence, was uplifting as it stirred our souls. His pacing, the rise and fall of voice was mesmerizing as he spoke of his dream and the unfairness of the dehumanizing system of legal discrimination which existed in the South – Jim Crow Laws, which relegated black Americans to the status of second class citizens.”

Larry admires Dr. King’s ability to inspire and encourage others to act in kindness and in peace. Through Dr. King’s leadership and efforts, the Civil Rights Act of 1964 and the Voting Rights Act of 1965 were passed. “These new laws were monumental – but to be clear, these achievement were not the work of one man. They were the work of many. Dr. King was the inspiration, the public face, the person who could move many to action, but there were many others black, white and brown Americans, young and old, Northerners and Southerners, students from the across the country who gave their hearts and soul and put themselves at great risk, even death in some cases, in the pursuit of equality, freedom, justice and service to humanity.”

Larry reflects on his experience at Southwestern during the late 60s and early 70s, sharing, “I learned the power of a liberal arts education to enable me to develop my whole self, to learn how to learn, to appreciate different perspectives, to understand broadly and deeply the issues that impact the human condition. I learned that mastery of a broad range of intellectual and cultural thinking and content lends perspective to any decision-making. Southwestern cultivated in me an avid curiosity and the willingness to question broadly and deeply and to listen with caring, debate cogently, and judge fairly; as well as an awareness that further enabled me to draw clear and clean ethical lines, even in the face of adversity.”

Ken grew up in Waco, TX, and entered Southwestern as a sophomore transfer student in the fall of 1968. Ken was good friends and high school teammates with Larry Haynes, who started SU as a freshman that same year.

Ken reflects on their time together in high school. “After baseball and basketball games the team would often gather at my house. I remember that was the first time Larry, who transferred from an all-black high school, had ever been to a white family’s home.”

Times were different then. Waco had just started integrating, and tensions were high. But in retrospect, Ken says, “I was oblivious to what was going on around us. I was consumed with typical teenage things – sports, school, my friends and my social life. Larry was one of my best friends, but I don’t think I realized the significance of what he had to deal with.”

When they came to Southwestern, even though they knew and respected Larry, Ken’s parents weren’t comfortable with him having a black roommate. “Larry was very gracious about it, but it is one of the great regrets of my life. I wish I would have handled that differently.”

Still, although they weren’t roommates their friendship continued to flourish. They were teammates and developed a strong bond, standing in each other’s weddings and sharing life’s ups and downs throughout the years. They remain close friends today.

Fifty years later, Ken reflects on Dr. King’s legacy: “He was truly a man before his time. He acted with love and kindness, and his actions helped me to become a better, more accepting person.”

The biggest lesson he learned from Dr. King – and one he still lives by today, is simple but powerful: “Just look into each person’s heart.” 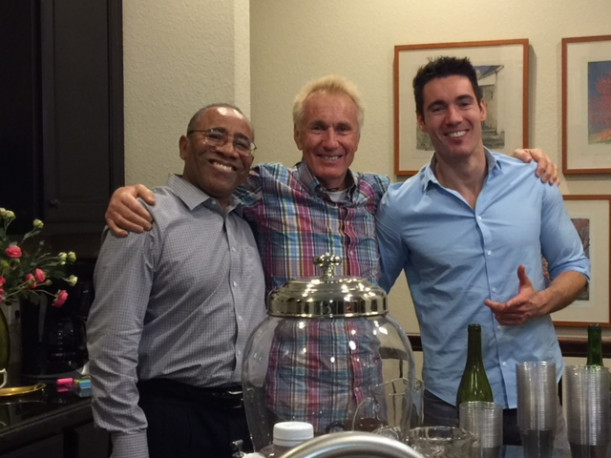 As we honor and celebrate the life of Dr. King, Larry reminds us that he “hoped he’d not be remembered for his Nobel Prize, his PHD’s or other personal awards, but that he be remembered as a drum major for justice, peace and righteousness - of living a life committed to helping, cheering, inspiring and loving others.”

At Southwestern, we intentionally foster diverse perspectives and encourage activism in the pursuit of justice and the common good. The Coalition for Diversity and Social Justice and the office of Diversity Education have sponsored several upcoming activities planned to honor MLK 50.

All of the events below are free and open to the public: