In my series “Beyond Minimalism” I have employed two very different and opposing theories in sculpture, static geometric forms and quick organic movement, and hopefully have created a new path between them for the viewer.

I use computer 3D modeling software to design the work and then fabricate the forms from industry standard lumber. I want to maintain the precision that is inherent in the computer software and a part of minimalist theory. Every singular unit that is placed changes the appearance of the whole from each side. The technology allows me to fully explore the works potential before construction.

Although the individual shapes are made by hand, I work towards a uniformity and precision of shape, thus, emphasizing through contrast the organic line of movement. Though the parts are geometric and follow a common pattern, the expression of these parts are highly complex and organic. The “statement” then comes from the chosen arrangement of these individual parts into an organic line of movement. In terms of size and finish, the shapes themselves appear exactly the same. The creation of the shapes in this way makes for a sculpture made up of unit forms, each unit is the same but the complex structures themselves are arranged according to the movement required for a sense of upward flight or downward collapse. In my series the forms depend upon the repetition of strong symmetrical geometric units organized along a complex spline. These works create unique visual expressions inherent in their opposition to the solid geometry of the unit along with their opposing paths. The dynamics of the line creates emphasis in these eruptions of vertical movement that deny the weight and stillness of the singular forms. The idea of making something so large out of singular units and then creating an organic movement pulls the viewer along the path and the opposing sensations as they walk around the work. I create the forms to feel impossible in some way, whether that is by having two splines that move the forms in opposite directions or in making a form that appears to be unbalanced.

Sculpture is about the human experience with solid matter in space, our response to actual weight, color, detail, line of sight, shapes and forms. Not all sides are in view at the same time or moment, so as the viewer engages the work by moving around it, each side must compel the viewer toward a variation of the statement or intent of the work. It must compel a physical response from the viewer of the power of the form. Most importantly it should make the viewer aware of their own physical presence in relationship to the work and to the environment in which the work resides. It is real physical sensation not just imagination at work. The form should provoke a response from the viewer beyond the intent of the artist as it merges the artist’s intention with the viewer’s own experiences in the hope of expanding the visual dialogue. 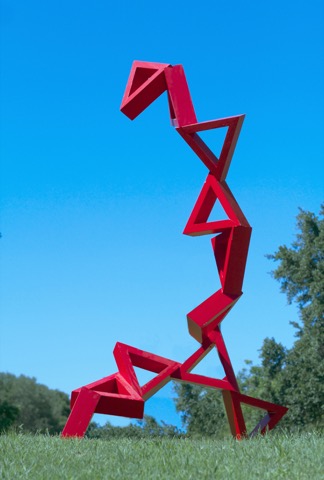