In my series “Net-Works” I explore the interactions between line, surface texture, and solid form through abstract constructions while also integrating ideas behind social issues as “getting caught” in fishing nets. Line can be seen in my pieces through the use of bent wood, which act as the base of the fishing nets. In some pieces the lines of the wood seem to create a solid form by integrating the empty space between each piece of wood while also incorporating the use of light and shadow to create an almost solid seeming form. The nets themselves, as well as, the mixed media incorporated create texture and solid form by off setting the sheer use of line as a three dimensional form. These three interactions play a key role in the construction of my pieces, as well as, helping each individual piece to uniquely represent a specific sociopolitical issue. I decided to represent these issues becoming caught in fishing nets because of the way we, as Americans, see and hear about these social problems, thus allowing them to become so integrated within our culture that we are blind to how they impose upon us. They have become black and white issues within our culture; either accepted or chastised, with no gray tones of variation thus causing the polarization of our belief systems and our political systems blocking any acceptable way to resolve them. 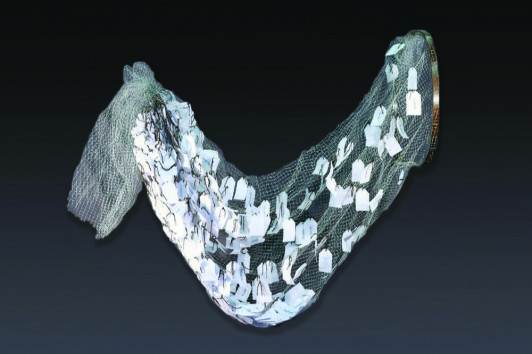