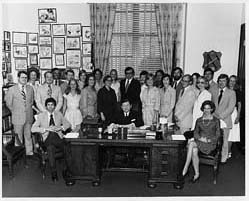 The Tower papers, when received at Southwestern University, contained two large boxes labeled “General Files” that held folders related to the senator’s office administration, conferences, and a few other topics. The remaining items in this series are miscellaneous files and microfilm that were found scattered throughout the papers.

The first folders in Box 1 contain biographical information about Senator Tower including photocopies of photographs from his high school yearbook. Also found in the Office, Staff Administration subseries are clippings, handouts for visitors to Washington, staff information lists, and histories of both Senator Tower’s Senate Floor desk and his Russell Senate Office Building office.