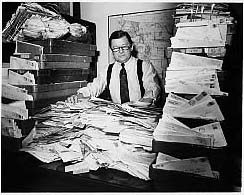 During his 24 years in office, Senator Tower received thousands of letters from Texans and other citizens that revealed their concerns with the issues of the day: Communism, social welfare programs, Vietnam, environmental issues, women’s rights, foreign policy—and the price of wool in the Texas Hill Country and the closing of the local post office. By far the most correspondence is with constituents, but congressional colleagues, foreign dignitaries, government officials, representatives of special interest groups, and non-Texans are also represented.

The standardized constituent responses, which begin with hand typed “flexos” or “robos” and end with computer generated “data correspondence,” reveal the changes that the use of word processors and computers brought in the handling of the large volume of mail that Congress receives. Some personal and political correspondence is found in the files, especially in the early 1960s, but most such correspondence is in the Personal and Campaign/Political Series. In addition to correspondence, there are occasional enclosures, recommendations, requests for publications, invitations, and pleas for aid with problems concerning the federal government.

Correspondence in the V.I.P. subseries was found in ring binders or was identified as such by notation. Most of the correspondence in the President and White House files is outgoing from Tower or incoming from White House staff. There are a few presidential letters including a two-page letter from former President Eisenhower explaining his endorsement of Advance magazine, clarifying a statement he made about the South, and commenting on Republican Party politics. A file labeled, “Nixon, Richard Resignation” contains a copy of Nixon’s August 5, 1974, statement announcing the release of the White House tapes and a copy of his August 8 resignation letter. Correspondence from Tower generally concerns legislation, policy, and appointments and nominations.

Two folders concern Lee Harvey Oswald and the Kennedy assassination. Oswald contacted Tower, his senator, when Oswald was trying to return to the United States from the Soviet Union, and one folder contains copies of related correspondence. The second folder contains letters from citizens responding to the assassination, including several telegrams and letters blaming the “John Birchers” and “ultra-right wingers” for Kennedy’s death. The senator also received letters of support, some of which are anti-Communist, anti- Semitic, and anti-civil rights. Most of the V.I.P. correspondence is with colleagues in the Senate, and includes separate files at the beginning of the subseries for Senators Howard Baker, Barry Goldwater, and John Stennis. The correspondence, which is both incoming and outgoing, contains discussion of staffing and committee/political appointments; announcements of hearings and special meetings; pleas to support bills and amendments; and position statements regarding such issues as defense, the Vietnam War, the Watergate scandal, SALT II, the Davis-Bacon Act, the Panama Canal, the Congo, and health care.

The subseries General Correspondence, Flexo/Robos, CMS Correspondence, and Data Correspondence primarily contain letters to and from the senator’s Texas constituents. These files often reveal constituents’ efforts to influence the legislative process. Because of Senator Tower’s strong identification as a conservative, he received a number of letters and pamphlets from persons on the far right who saw him as sympathetic to their cause. In addition to the matters of national importance, many letters concern Texas issues: oil depletion allowances, beef exports, Texas military bases, construction projects, the Chamizal Treaty, cotton shortages, local utilities, parks and recreational areas in Texas, and local politics. Two subseries, Name Reports and Topic Reports, are microfilmed reports and statistics of correspondents’ names, addresses, occupation codes, topics, and number of letters sent. These microfilm serve as indices to some of the computer generated correspondence.