By multiple historical accounts, Southwestern University held the first Homecoming on record on Wednesday, April 21, 1909 in Georgetown, Texas. Below are excerpts from those accounts.

By Dr. William B. Jones, Professor Emeritus of History and University Historian

Student and alumni support for the University crystalized at the first Homecoming celebration held on April 21, 1909. The idea for it came from Mr. Allen K. Ragsdale, earlier a financial employee at Southwestern, who continued to support it after accepting a job with the Southland Life Insurance Company in San Antonio. He broached it to the faculty six weeks before the event took place. He suggested that it be held on San Jacinto Day and that all ex-students and former instructors be invited by letter. Enthusiasm for the event ran high, and Georgetown residents, under the leadership of Col. W.K. Makemson, and former students raised funds, provided homes, prepared and served a barbecue supper, and decorated the town buildings. Members of the senior class waited tables. A faculty resolution following the event thanked all who helped to make it a success. The most unique vote of thanks went to the Artesian Manufacturing and Bottling Works of Waco for 1,200 bottles of Dr. Pepper. [Dr. Robert] Hyer stated in his report to the Trustees in 1909 that “the success of our athletic teams and our great Homecoming of April 21, have caused the great daily newspapers to devote more space to Southwestern affairs than they have ever done before.” 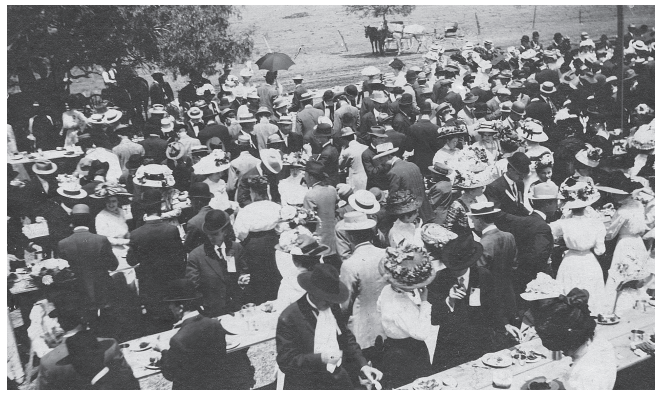 By the Students Association of Southwestern University

Yes - we remember - and that is not all, we can never forget it. Last Wednesday was Southwestern Homecoming day, and many events in the city will in the future be dated accordingly. It was a GREAT DAY, involving every citizen and student and every home and business house in the city. Its program vitally interested [20,000] Methodists in the State of Texas and involved thousands of ex-students of the university. It was beyond any doubt the greatest day known in the history of any educational institution in the State. It grew out of the love borne for it by students of the last 35 years who wished once more to visit their alma mater and grasp the hands of those beloved professors who labored for their interests and to greet other students, roommates, classmates and chums of the bygone days of youth.

All events of the day were featured and they began at daylight with the ringing of the old college bell, and the hurrahs of present and past students. Before breakfast various small reunions could be seen in the streets, at the Chapter houses, on the campus, about the old buildings, on the lawns of the homes of the city and these same small reunions could be easily heard for blocks (sometimes). There was not an old man or lady in town. Dignity and policy were left at home - every boy was a schoolboy and every lady was as coy and shy as when she lived in the Annex. “Barbs” and “Greeks” affiliated in perfect harmony - and “ex-Preps” and “Grads” loved each other in demonstrative style. You could not distinguish preacher from farmer, lawyer from doctor, congressman from statesman, nor dignitary from civilian. Badges giving names and years of attendance were worn. There was not a dull hour to any visitor.

You cannot imagine the revelry that has occurred in Georgetown with this magnificent Homecoming. It was an occasion I will remember always. So many grads gathered for the reunion - you would have enjoyed seeing so many of your old friends. I wish it were so that you could have been here. Everyone asked about you and were sorry to hear you could not come. The residents all over town opened their doors for the visitors…There was so much merriment and celebration. The entire town was draped with “Welcome” banners in Southwestern’s colors. Everywhere you went, there were greetings between long-lost friends and well-wishers exchanging news of their lives since leaving school.

After registration…the huge crowd repaired to the auditorium to hear speeches from Mr. Ragsdale, Dr. Hyer, Mayor Ward and Prof. Snyder. Then everyone marched out to the barbecue tables set out on the grounds and were served the most bountiful meal by a throng of  Grad waiters who volunteered for the task. From there, everyone went out to the track field to see Baylor play against our team, which ended in a rout, I am so very happy to report. And later, we all watched a team of “Old Timers” play a riotous game against the Southwestern baseball team. You would have enjoyed seeing this so much, my dear Morris. I could hardly imagine that you were not here to be a part of it.

Later, a mock debate was held (I did not go) between the Alamo and San Jacinto Societies to entertain the old-grads. It was all I could do to get to the orchestra concert and Glee Club program - but would not have missed it for the world. It lasted until midnight and at the end, the entire crowd stood and sang “Blest Be the Tie” - a moment I shall remember forever. It is so appropriate, don’t you agree, that our great university chose this song to end our first Homecoming? We have all been so close - Georgetown and Southwestern, its students and the town, our lives so entwined for all these many years. I doubt there is another place like it anywhere. If it had not been for SWU, you and I would have never met and for this I will be forever grateful. They voted to repeat this event in five years, and I hope and pray we will be in a position then to return so you can experience it the way I have.

For now, my dear, I must close. I am exhausted beyond words and still have guests in the house to entertain. I will write more after I rest and recover. Sleep well, my darling, “when we are called to part, it gives us inward pain. But we shall all [be] joined in heart and hope to meet again.”

Your own little girl,
Early 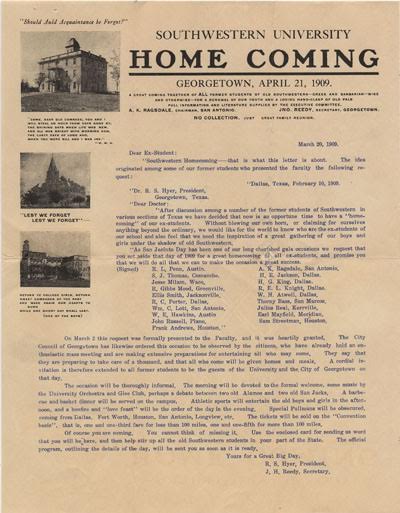